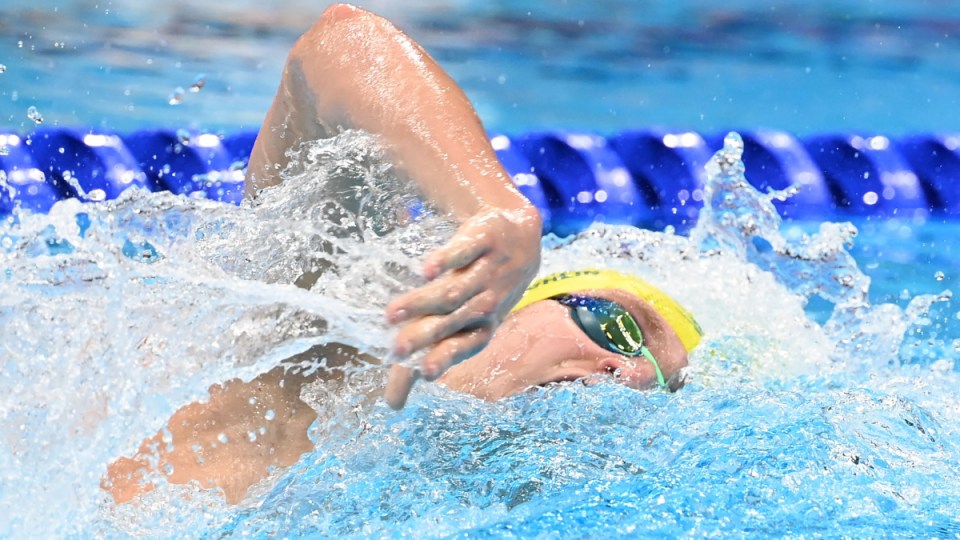 Australia's Jack Alan Mcloughlin on his way to silver in the men's 400m freestyle on Sunday. Photo: Getty

McLoughlin took silver when pipped in the final metre of the men’s 400m freestyle on Sunday at the Tokyo Aquatic Centre.

The 26-year-old from Brisbane produced a power-packed swim but was overwhelmed by Tunisian teen Ahmed Hafnaoui in lane eight.

With one lap to go McLoughlin led by 0.31 seconds, but Hafnaoui charged to victory with a flying last 50m to win by just 0.16 seconds from the Australian.

“It’s my race plan,” McLoughlin said of his lead-from-the-front assault.

“I just wanted to get out front and say ‘chase me’. It almost paid off.

“I couldn’t see all the way over (to lane eight). I could see the middle of the pool and I was just trying to hold on.

Such a strong race for both Aussies, with Elijah Winnington in 7th in 3:45.20.#TokyoTogether #Swimming @DolphinsAUS pic.twitter.com/cbmiXahDS6

“I didn’t breathe in the last 10 … I knew they were coming at me and was just trying to get that hand on the wall.”

Winnington and McLoughlin both earned selection at June’s trials by tipping out defending champion Horton, who is on Australia’s Tokyo team as a relay swimmer only.

Horton’s absence, and that of drug-tainted Chinese swimmer Sun Yang, opened up the 400m title in Tokyo to an emerging batch.