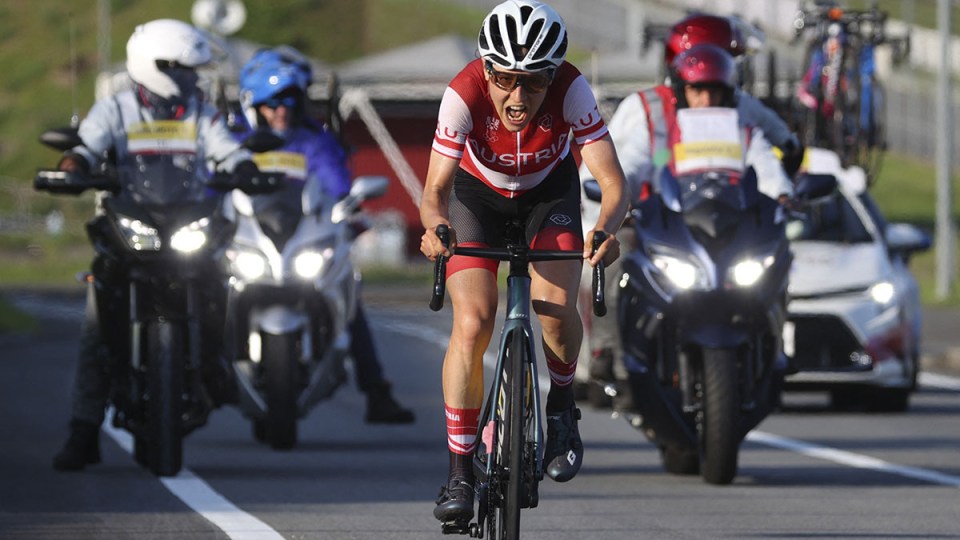 The Dutch rider clearly thought she had won, raising her arms in elation as she crossed the line, and it turned out other riders in the main group also did not realise Kiesenhofer was ahead of them at the finish.

It had echoes of Watt’s breakthrough gold medal in the same event at the 1992 Barcelona Olympics.

The Australian, who was working at Sunday’s race as a photographer, also was by herself at the finish of the Barcelona race.

French star Jeannie Longo finished 20 seconds behind and, like van Vleuten, believed she was the gold medallist.

This time, Kiesenhofer was part of a five-rider group that went clear at the start of the 137-kilometre race, held in hot and humid conditions, and built a lead of more than 10 minutes at one point.

With 41.5 kilometres left, Kiesenhofer went clear by herself and stayed away for the win.

Behind her, van Vleuten and the rest of the main group had caught Polish rider Anna Plichta and Israeli Omer Shapira about five kilometres from the finish and thought they had reeled in the last of the initial breakaway riders.

The Dutch 2019 world champion then attacked in what she believed was the race-winning move – only it was for the silver medal.

There was high drama at the finish, with Kiesenhofer collapsing in tears as she defied the might of the Dutch team, who were the overwhelming favourites.

It is easily the biggest result of Kiesenhofer’s career.

Immediately after crossing the line, van Vleuten hugged a Dutch team official in elation, only to be told that she had not won.

As with the men’s road race on Saturday, the absence of race radios made for a chaotic event.

But Kiesenhofer, who has a PhD in mathematics at Cambridge University, had done her sums to perfection.

Making her Olympic debut, Australian road captain Tiff Cromwell had a strong ride in the hot and humid condition and finished 26th at two minutes 56 seconds.

“I’m happy I just kept fighting to the end … I had nothing left, that’s for sure,” she said.

Sarah Gigante was 40th and Grace Brown finished 47th, while top Australian hope Amanda Spratt was among 19 of the 67 riders who did not finish.

While the Dutch riders and the other big names in the race were left kicking themselves, silver was still a fine result for van Vleuten.

The 2019 world champion was the one heading to a solo gold medal in the road race five years ago when the Dutch star crashed horribly on the final descent at the Rio Games.

She suffered several concussion and three spinal fractures, but made a remarkable recovery and was back racing only weeks later.