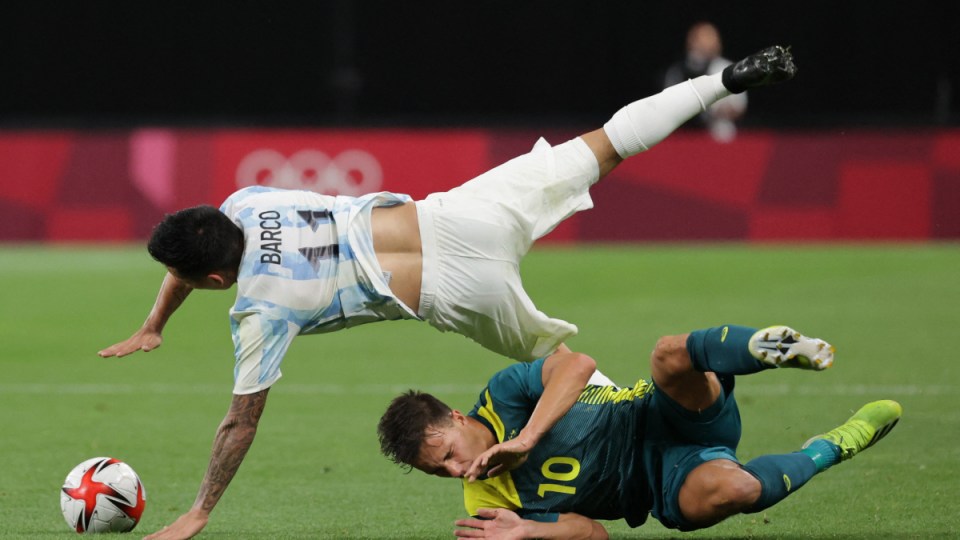 A Lachlan Wales first-half strike has set Australia’s men’s football side on the way to an upset 2-0 win against Argentina in Sapporo on Thursday night.

Graham Arnold’s Under-23s side, which is better known as the Olyroos, took the attack to their highly rated opposition and were rewarded when Wales tapped home from close range at the back post after a Joel King assist across the six-yard box had eluded Mitch Duke and his defender.

In a physical game in which seven Australians collected yellow cards, the game took a turn for the worse shortly before half-time when Argentina’s Francisco Ortega was dismissed for a second yellow card after tangling with Riley McGree.

Both sides hit the woodwork, but it took until late for Australia to take advantage of its numerical superiority.

Melbourne City starlet Marco Tillio scored with a sweetly struck first-time shot – only his second touch after coming on as a substitute less than 90 seconds earlier.

Fittingly, his first touch orchestrated the 79th-minute attack by playing the ball to Mitch Duke, who laid the ball back to Tilio for his match-winning strike.

Duke, one of the three over-age permitted to play in each team, almost scored a third just before the full-time whistle have earlier clipped the crossbar about 20 seconds into the second half.

In their first Olympics since 2008, the Olyroos next play the star-studded Spain, which earlier drew 0-0 with Egypt.

The match, also in Sapporo, is scheduled for 8.30pm on Sunday.

Australia’s win, which sees it top the Group C standings, avenged 1-0 defeats to Argentina at the 2004 and 2008 Olympics when the South Americans went on to win gold.

It comes after the Matildas kicked off its medal quest with a 2-1 win against New Zealand’s Football Ferns on Wednesday night.

The result would not come as a surprise to Arnold, who earlier said his side was ‘‘ready to shock the world’’.

He insisted after the match his side was in the hunt for a medal.

“I know in the past that it’s seen just as a success to make the Olympics.

“I don’t see that. We’re here to compete for a medal like all the other teams.”

Arnold said that during difficult times it was a result to put smiles on Australian faces back home.

“It was probably the last thing I mentioned before the boys went on the pitch,” Arnold said.

“Australia – New South Wales especially – is going through a tough time at the moment with COVID-19.

“I said to the boys there’s a lot of families at home in lockdown, let’s put a smile on a lot of Australian faces and give them something they will remember.

“There were probably a lot of people back home who didn’t give us a chance of winning the game before but really enjoyed that tonight.

“Sometimes when you mention the name of a nation like Argentina everyone starts thinking of Diego Maradona, Lionel Messi and them being Copa America champions.

“But it was more about focusing on ourselves for the last week and making sure that all their players knew their roles and jobs.

“We had to have the belief that we could win the game.”

Wales told Channel 7 after the game “it was a dream come true”.

“Tonight we shocked the world and hopefully we can keep shocking the world throughout the tournament,” Wales said.

Elsewhere, France started dreadfully with a 4-1 thrashing by Mexico, while Brazil striker Richarlison scored the first hat-trick of the tournament as the defending champions held off a late rally from Germany in a 4-2 win at Yokohama’s International Stadium.

Hosts Japan also made a winning start with a late strike from midfielder Takefusa Kubo in a 1-0 victory over South Africa, which was dealing with a COVID-19 outbreak on the eve of the Group A match.

In Group D, Franck Kessie scored the winner to earn Ivory Coast a 2-1 win over Saudi Arabia in a heated game in Yokohama, the sides committing 27 fouls between them.

The African nation was reduced to 10 men when substitute Aboubacar Doumbia was shown a straight red card for his involvement in a scuffle.

Making its first football appearance since the 1964 Tokyo Games, Romania beat Honduras 1-0 thanks to an Elvin Oliva own goal.