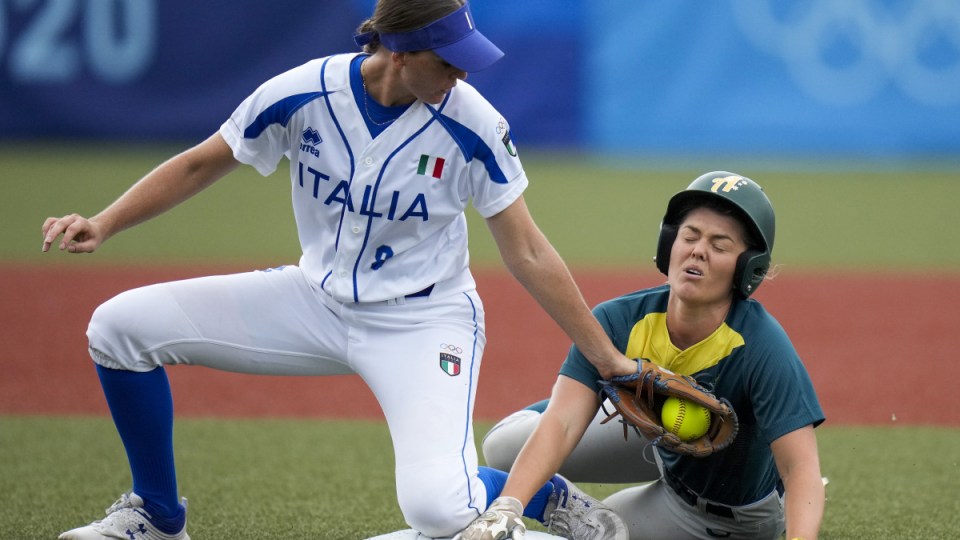 Australia's Taylah Tsitsikronis crossed for a sole run in the all-important win over Italy. Photo: AP

Australia’s softballers have rebounded from a heavy opening loss to edge past Italy 1-0 in their second Olympic outing in Tokyo.

The Australians suffered a disappointing 8-1 loss to hosts Japan in the opening match but only had to wait a day to book their first win on Thursday.

But it was a tense affair, with Australia coach Laing Harrow bringing in Ellen Roberts to replace Kaia Parnaby in the seventh and final innings.

The Italians had two runners on base and two outs, with Roberts able to secure a crucial strikeout with Italy losing Marta Gasparotto.

What a nail biting game, but our @SoftballOz Aussie Spirit held their nerve, and kept the Italians scoreless for their first win of #Tokyo2020.#TokyoTogether #Softball #ITAvAUS pic.twitter.com/4u3h7STnoW

Taylah Tsitsikronis crossed for the sole run in the second innings.

The Spirit catcher drove down the line for a double before Jade Wall singled to second base to see her home.

Italy’s Giulia Koutsoyanopulos got on base in the sixth innings, but she was left stranded on second.

Despite the late change pitcher Parnaby delivered a solid display, striking out Andrea Filler in the seventh innings in a crucial second get.

But as the Australians scrambled for the third out, Italy’s Giulia Longhi singled to left field, with her pinch runner Fabrizia Marrone then making her way to second base.

Phew…. that was close

Aussie Spirit get their first of the Olympics over Italy

Parnaby handed out her first walk of the match with Laura Vigna joining Marrone on base, before Harrow called on Roberts to finish the job without Australia batting again.

It was an important win for Australia, with the top two sides in the six-team competition advancing directly to Tuesday’s gold-medal match.