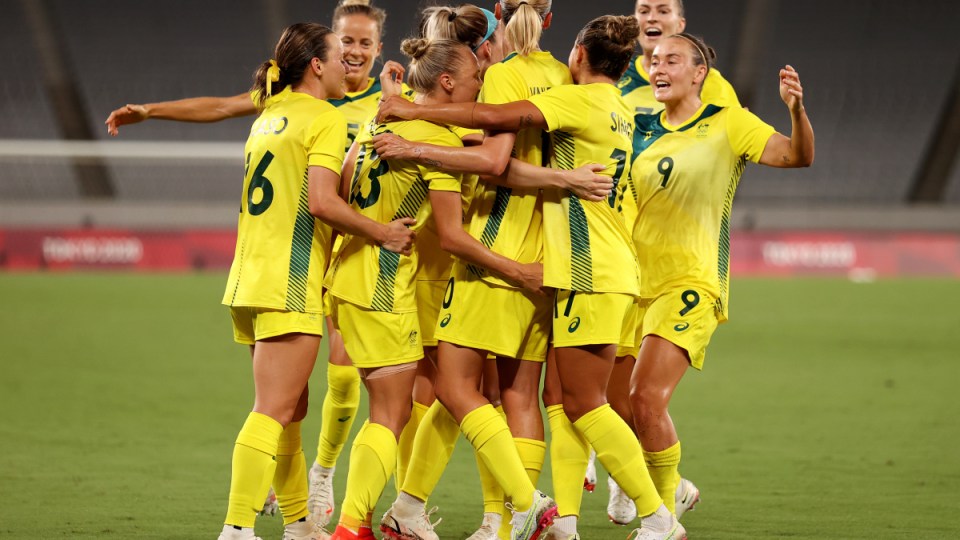 The Matildas made an ideal start to their Olympic campaign. Photo: Getty

Australia’s women’s football team the Matildas have started their Olympic campaign with a 2-1 win against New Zealand at Tokyo Stadium on Wednesday night.

Having watched Sweden outclass world champions USA 3-0 in the other Group G clash, Matildas coach Tony Gustavsson was viewing the opener against the Football Ferns as a must-win match.

Fielding an experienced line-up that featured all of Australia’s stars, the Matildas bounced back from the lows of heavy losses against European heavyweights to produce a high-tempo performance that will restore the confidence of the world No.9 side.

Tameka Yallop opened the scoring by smashing home from about 10 metres after a clever Sam Kerr assist played her into space for the shot.

GOAL!! @Tameka_Yallop puts @TheMatildas in front with a powerful strike!

Matildas captain Kerr then earned a goal of her own, heading home at the near post from a Steph Catley corner to double the Matildas’ lead in the 34th minute.

The two-goal margin was well deserved for an attacking first-half performance.

Both sides created chances in the second half, but New Zealand managed to pull back a goal through Gabi Rennie in injury time to make for a tense conclusion to Gustavsson’s first win as Matildas coach.

Another highlight for Australia was teenagers Mary Fowler and Kyra Cooney-Cross making their Olympics debuts in the 75th minute, but neither were able to find a goal.

A late one for The Ferns…

Gabbie Reni heads past Lydia Williams to make it 2 – 1!

Kerr said the win was welcome after a five-game drought.

“It’s always good to win your first game. I think it gives you a lot of confidence going in to the rest of the tournament,” Kerr told the Seven Network.

“Everything was for this moment so we feel as prepared as ever.

“The results before didn’t go our way, but it was all for this game and look, we’ve got the three points and we’ll move on.”

The day’s results will give the team much-needed confidence of advancing past the group stage after a 0-0 draw against Sweden in a June friendly.

The Matildas play the Swedes at 6.30pm AEST on Saturday.

Earlier, Stina Blackstenius scored a double as Sweden stunned the US.

The Americans, ranked No.1 in the world and the favourites to win gold in Tokyo, were riding a 44-match unbeaten streak.

Sweden, ranked No.5, took a first-half lead when Blackstenius’ header found the net.

Lina Hurtig then scored in the 72nd.

Six-time FIFA Player of the Year Marta became the first player to score in five straight Olympics in Brazil’s 5-0 win over China.

Marta finished with a pair of goals for Brazil, which is ranked No.7 in the world. Debinha, Andressa Alves and Beatriz also scored.

Marta has 111 international goals, more than any Brazilian player, male or female.

After her goal in the ninth minute, Debinha added another in the 22nd minute to put Brazil up 2-0.

Marta added her second in the 74th minute before Alves scored from the penalty spot. Beatriz closed out the rout with a goal in the 89th minute.

Brazil is playing in its first major tournament under Pia Sundhage, the former coach of both the US and Swedish women teams.

Sundhage coached the US team to the gold medal at the 2012 London Games.

Hosts Japan and Canada drew 1-1, with Mana Iwabuchi netting the equaliser in the 84th minute to salvage a point.

Christine Sinclair, the all-time leading international scorer among men and women, scored her 187th career goal in the sixth minute to give the Canadians the early lead.

It came in her 300th appearance with the team.