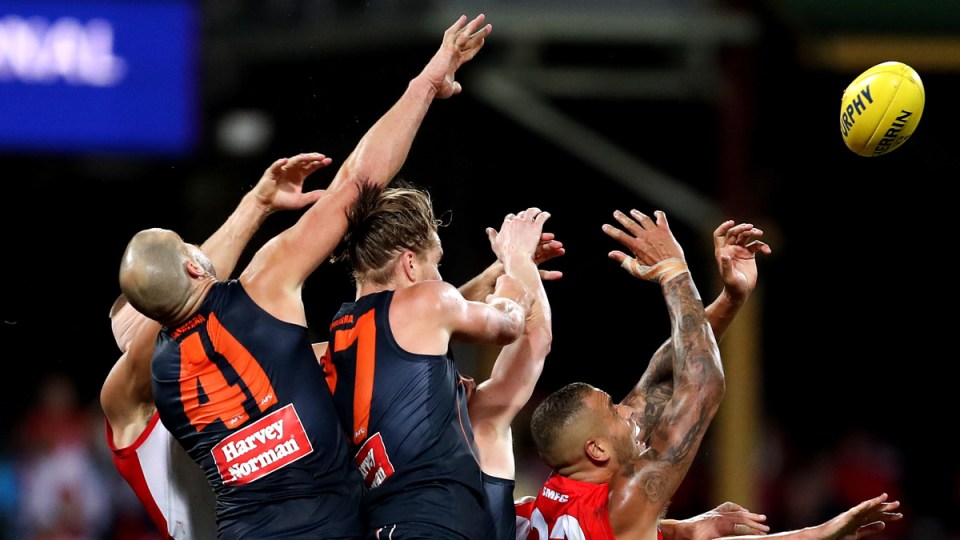 Sydney Swans and GWS Giants have been relocated to Queensland before their derby. Photo: AAP

Richmond’s must-win clash against Brisbane Lions on Friday night has been shifted from the MCG to Metricon Stadium after Victoria announced a snap five-day lockdown.

The AFL season has been thrown into chaos yet again as Victorian health authorities attempt to get the state’s latest COVID-19 outbreak under control.

The fixture scramble means there will be four games played at Metricon Stadium this round.

The Lions arrived in Victoria on Wednesday for Friday night’s scheduled match against the out-of-form reigning premiers, which will be Tigers legend Jack Riewoldt’s 300th game.

However, those clubs will now head north and play their game in the same time slot but at the Gold Coast venue.

Riewoldt earlier on Thursday said he would understand if his milestone match was affected in any way due to the COVID-19 situation.

“It is an important game of football for me, but there are more important things at stake here at the moment and that’s obviously the health and wellbeing of everyone here in Victoria,” Riewoldt said.

“The whole week has been special to me. There could be one person or 100,000 people in the stands on the weekend and it would still be as important to me.”

Sydney and Greater Western Sydney flew out of Melbourne on Thursday morning after being told of their latest move late on Wednesday night.

Western Bulldogs, which are due to play Gold Coast at Metricon Stadium on Saturday, were departing earlier than planned on Thursday.

And the Victorian exodus is not ending there with the Kangaroos’ match against Essendon on Sunday now moved from Marvel Stadium to Metricon Stadium on the Gold Coast.

The Bombers are scheduled to play GWS in Round 19, before a date with the Swans the following week.

Those games will likely be played in Queensland, especially if the Victorian situation worsens.

To vote next week, head to google and search 'afl vote'. pic.twitter.com/wXjngZbkU7

The Sydney teams were due to play their derby in Ballarat on Saturday, but that will now be played at Metricon Stadium on Sunday night.

Both clubs have been based in Victoria since June 22 due to NSW’s coronavirus crisis but will now call Queensland home for the immediate future.

With Melbourne to enter a fifth lockdown, it means the Demons’ clash with Hawthorn at the MCG on Saturday, St Kilda’s match against Port Adelaide at Marvel Stadium on Saturday night and Collingwood’s encounter against Carlton at the MCG on Sunday will all be lockouts.

As has been the case in previous lockdowns, the AFL moved swiftly to relocate clubs.

“The decisions we have made this morning regarding the locations of a number of teams have been taken out of an abundance of caution,” the league’s club and broadcasting manager Travis Auld said.

“Our approach remains to take risk out of the season where the opportunity presents.

“We continue to work towards our priority of reuniting the families of both the GWS Giants and Sydney Swans and the decision to relocate both sides to Queensland provides maximum flexibility required to achieve that.

North players and staffers have been told to pack for a three-week stint away from home.

“We need to do what we can to keep the season moving,” North’s chief executive Ben Amarfio said.

“The NRL and the AFL have been absolutely fantastic because they’ve been doing this for so long.”

Due to the five-day lockdown announced by the Victorian State Government, the AFL wishes to advise that all round 14 #VFL and #VFLW scheduled matches will not go ahead as planned 👇https://t.co/BcAkzVN2F2

UPDATED ROUND 18 FIXTURES (all times AEST)