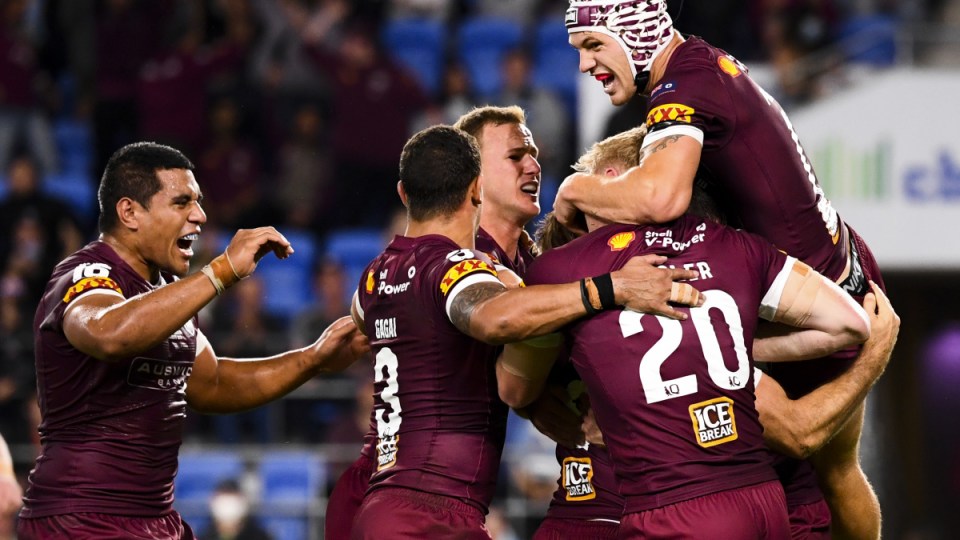 Ben Hunt helped restore some pride for Queensland in a 20-18 win that ensured New South Wales did not complete a State of Origin clean sweep at Cbus Super Stadium on the Gold Coast on Wednesday night.

In an action-packed match in which the lead changed numerous times, Hunt collected two tries and pulled off a match-saving tackle and Kalyn Ponga delivered the poise and class to ensure the home side finished the series on a high after a 50-6 loss in Townsville and a 26-0 loss in Brisbane.

The Maroons made a bright start for the first time in the series, with Valentine Holmes securing a 2-0 lead from a ruck interference penalty near the posts in the fifth minute.

But any complacency was short lived, with Blues centre Latrell Mitchell working his magic in the 10th minute to dice over.

Latrell is TOYING with the best players in the world, and it looks way too easy.

Mitchell duly converted for a 6-2 lead.

The Maroons were unlucky not to strike back almost instantly through a Holmes try, but referee Gerard Sutton correctly ruled a knock-on.

But the pain was short lived as 19-year-old Origin debutant Hamiso Tabuai-Fidow crossed for a try.

The North Queensland Cowboy was rewarded for backing up the charging run of Tino Fa’asuamaleaui, who had been put into a gap by Maroons five-eight Cameron Munster.

Holmes collected the extra two points to provide the 8-6 lead.

The Maroons applied plenty of pressure to extend their advantage, but solid Blues defence meant the sides went to the break with just two points separating the sides.

The new Blues halves link up and they take the lead. 💪💙

Five-eight Jack Wighton restored NSW’s lead in the 48th minute after a period of sustained Blues attack, with Mitchell adding the extras for a 12-8 lead.

But Queensland hooker Hunt burrowed his way over the line in the 57th minute to level the scores, once again after back-to-back sets.

Hunt’s second try, on the first play after an explosive break by fullback Kalyn Ponga, took the Maroons to a 20-12 lead.

But just as it seemed the Maroons could cruise to a morale-boosting win, a clever Mitchell Moses grubber kick collected by Api Koroisau ensured the contest again returned to a two-point game with little more than 10 minutes to go.

The Maroons dug deep as they defended desperately against countless NSW attacks, with the crowd issuing the trademark ‘Queenslander’ cry.

The underdogs felt they may have done enough, but a 79th-minute penalty ensured the drama wasn’t over.

The attempt by Mitchell, from just over the halfway line, fell agonisingly short, much to the delight of the Queenslanders.

Despite the defeat, NSW claimed the Origin shield for a 16th occasion, taking out the series 2-1.

Queensland has been victorious 22 times, with two series drawn.

Tom Trbojevic was awarded the Wally Lewis Medal as player of the series.