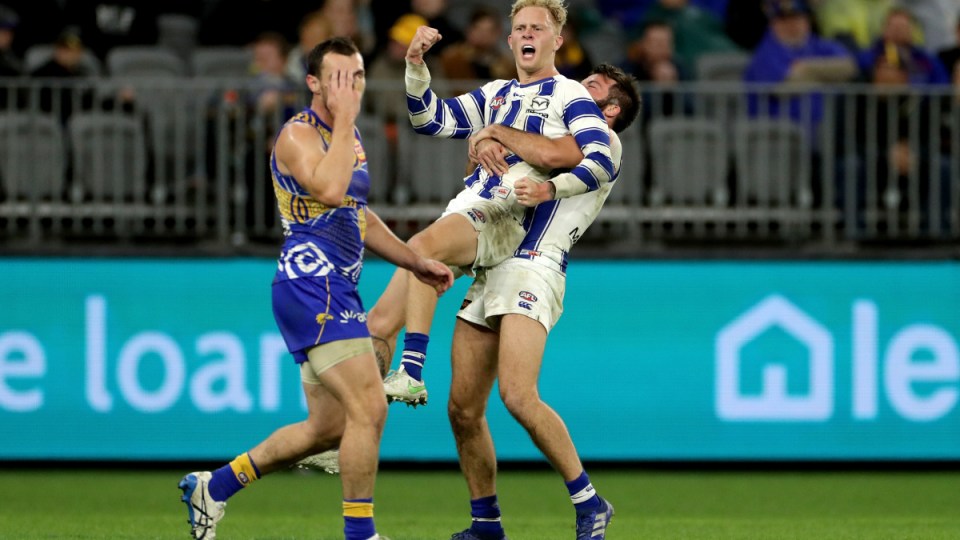 Jaidyn Stephenson of the Kangaroos celebrates with Luke McDonald after kicking a goal during the Round 17 AFL match between the West Coast Eagles and North Melbourne. Photo: AAP

North Melbourne are daring to dream of avoiding the 2021 wooden spoon after snaring the biggest scalp so far in their full-scale rebuild.

Things looked bleak for the Kangaroos after opening the season with eight straight losses, which followed on from losing the final eight games of 2020.

But North Melbourne have shot to form since the round 12 bye, beating Gold Coast and West Coast, as well as drawing with GWS.

The Kangaroos also put in fighting efforts against premiership fancies Brisbane and the Western Bulldogs.

The Kangaroos’ shock 10-point win over the Eagles at Optus Stadium on Monday night means North Melbourne are now just half a win behind 17th-placed Hawthorn, and six competition points behind Adelaide and Collingwood.

If pundits thought North Melbourne would merely roll over this year and accept the wooden spoon, they should think again.

“We want to win every game. That’s a fundamental staple. I’d like to finish off the bottom.

“(If you) come into our environment, (you will) get a sense of calm, growth, sense of fun. The guys are enjoying each other’s company.

“They are willing and prepared to step up and be selfless for their teammates.”

Noble feels the win over West Coast was a significant moment in his team’s rebuild.

“We’ll probably look back in 12 months time and this could be the marker from where we move off from,” Noble said.

“Our leaders now are driving that standard. They have been significant in last eight weeks in what they are creating.

“The dare is there, what we have since the bye, we have built some really good systems that dare – it’s not a risk. It’s the way we wanted to play.”

Importantly, Goldstein drifted forward in the dying minutes to kick the sealing goal, adding to his earlier goal.

Goldstein is now the record holder for the most hitouts in VFL-AFL history, with his 8525 taps bettering the previous record of Aaron Sandilands (8502).

“For Goldy to get the record tonight, the way he did, kick the last goal, it’s a credit to him,” Noble said.

“He’s a champion of our club, to be the record holder for the most hit outs is something we will reflect on tonight and give him a pat on the back for it.”

The Kangaroos will be back in action when they take on Essendon at Marvel Stadium on Sunday.

Kangaroos fight back to win over Eagles