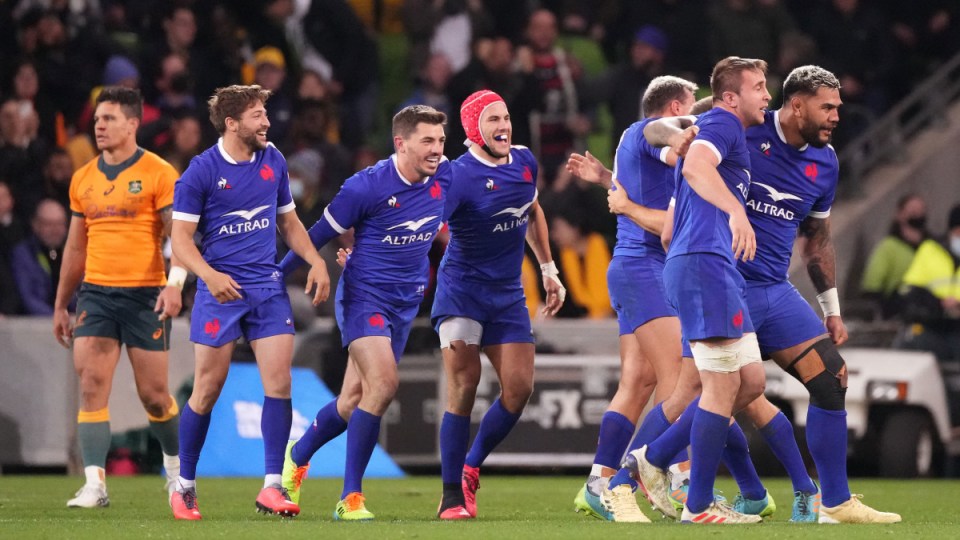 France has levelled the Test series with the Wallabies after a thrilling 28-26 win in Melbourne. Photo: AAP

France has taken its turn to taste victory with a late penalty securing a 28-26 win over the Wallabies in the second Test in Melbourne.

The Wallabies looked like they would repeat their opening Test heroics on Tuesday night, with Noah Lolesio again stepping up to put his side in front at AAMI Park with a penalty in the 75th minute.

But this time Les Bleus wouldn’t be denied, earning a scrum penalty against the feed with two minutes remaining and fullback Melvyn Jaminet kicking his seventh penalty to earn his team their first victory on Australian soil in 31 years.

With one win apiece, the series will be decided on Saturday night back at Brisbane’s Suncorp Stadium, the scene of the first Test.

Congratulations to France. All set up for a series decider in Brissy!

While it wasn’t always pretty, the Australians chanced their hands, scoring two tries to one but Jaminet finished with a personal tally of 23 points.

Just like in the first Brisbane Test, the Wallabies let the French skip away to a 10-point lead and were their own worst enemies with some crucial errors.

Despite controlling the bulk of possession and territory the Wallabies failed to convert that into points, with France again dominating the breakdown and forcing 12 turnovers to stem the attack.

Barnstorming winger Marika Koroibete was again among Australia’s best, running for a game-high 136 metres, and was unlucky to be denied two first-half tries.

The only French try came in the 21st minute against the run of play through winger Damien Penaud, with the Jaminet conversion setting up a 13-3 lead.

Tom Banks TORE through them 💨

The Wallabies snatched a vital five-pointer just before halftime when they hammered the visitors’ line before prop Taniel Tupou showed his skills to throw a cut-out pass for halfback Jake Gordon.

Wallabies skipper Michael Hooper crossed in the 70th minute to close the gap to four points before Lolesio’s late penalty put them ahead, but France was worthy of the series equaliser.

France captain Anthony Jelonch said he knew his forward pack were going to deliver something special at the late scrum.

“I could see the forwards’ faces before that last scrum and I could see they were very committed and were telling me, ‘We’re going to win it’,” he said.

“I’m so proud of the players tonight and particularly Melvyn who kicked 100 per cent.”

Wallabies coach Dave Rennie said discipline at the breakdown, with nine penalties, as well as crucial errors hurt his team.

“We were disappointed,” Rennie said.

“We didn’t get off to the fast start that we wanted but we fought our way back in and thought we’d stolen it late but not to be.

“You’ve got to give France credit – they were really good over the ball … and that had a massive effect on our continuity and ability to hurt them.

“It’s disappointing, but we have seen a lot of character in this group and we are pretty determined, so we will bounce back on Saturday.”

Rennie said despite the loss there was growth from the first Test.

“We were a lot better in a lot of areas,” he said.

“There was probably only two stats we lost – breakdown penalties and kicking battle.

“But we put ourselves under pressure at times and maybe overplayed at our end.”