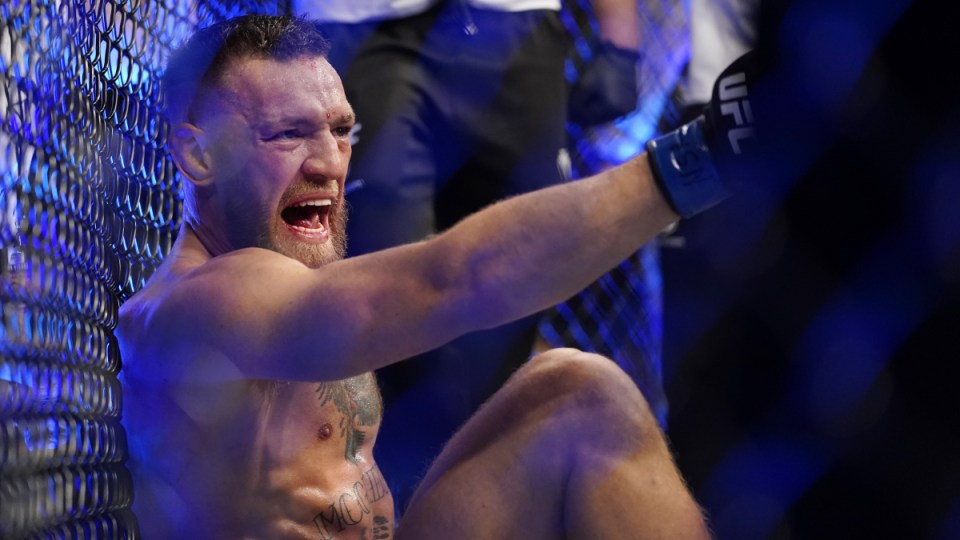 Conor McGregor yells out after breaking his shin in his UFC loss to Dustin Poirier. Photo: AP

Dustin Poirier beat Conor McGregor for the second time in six months when the Irishman broke his shin in the closing seconds of the first round at UFC 264 on Sunday.

The fight was stopped after the first-round bell when McGregor (22-6) was unable to continue.

The biggest star in mixed martial arts didn’t get up after falling to the canvas following a final-minute blow by Poirier (28-6), who will get the UFC’s next lightweight title shot.

Poirier said he thought McGregor’s leg broke when he checked one of his opponent’s kicks earlier in the fight.

"I feel like I'm coming into my own because I care less about all the noise around me surrounding fighting."@DustinPoirier discusses his latest win over Conor McGregor and what he thinks about challenging Charles Oliveira in the near future 🔊⬆️

Poirier was largely in control of the opening round, parrying McGregor’s kicks and landing several strikes before taking command on the ground.

After a long stretch of punches and elbows on the prone McGregor, Poirier knocked him down one last time – and McGregor’s ankle bent gruesomely as he fell.

“I felt something, for sure,” Poirier said.

“He fractured it on one of the kicks at the beginning of the fight, and then he broke it.”

The DIAMOND gets the dub via Doctor's Stoppage in RD 1️⃣ #UFC264 pic.twitter.com/fa4u4LVxzl

McGregor was furious about the circumstances of his loss before he was carried from the cage.

He also continued his lengthy campaign of verbal abuse against Poirier and his wife on the way out.

“This is not over!” he shouted.

UFC president Dana White said he was told McGregor broke his shin near the ankle. McGregor will have surgery.

White confirmed Poirier will get the next shot at new lightweight champ Charles Oliveira.

He also said he expects a fourth fight between McGregor and Poirier at some point after McGregor’s leg heals.

“The fight didn’t get finished,” White said. “You can’t have a fight finish that way. We’ll see how this whole thing plays out. Who knows how long Conor is out? Poirier will do his thing until Conor is ready.”

McGregor dropped to 1-3 in the cage since 2016, when he abdicated his UFC title and accepted a wildly lucrative boxing match with Floyd Mayweather.

McGregor has been unable to recapture his fearsome MMA form, losing decisively to Khabib Nurmagomedov and twice to Poirier while beating only an over-the-hill Donald Cerrone.

But McGregor’s star power has shown no significant decline despite the dwindling evidence of his once-transcendent skills. The celebrity-studded Vegas crowd was vocally behind McGregor, who strutted into the octagon with his usual flair.

Earlier on the pay-per-view card, Australian heavyweight Tai Tuivasa celebrated his violent first-round knockout of former NFL player Greg Hardy by climbing onto the octagon fence and doing a shoey – drinking beer from a shoe.

Hardy, who lost his NFL career in 2015 after being convicted of domestic violence, has lost two straight fights after a 7-2 start to his MMA career.