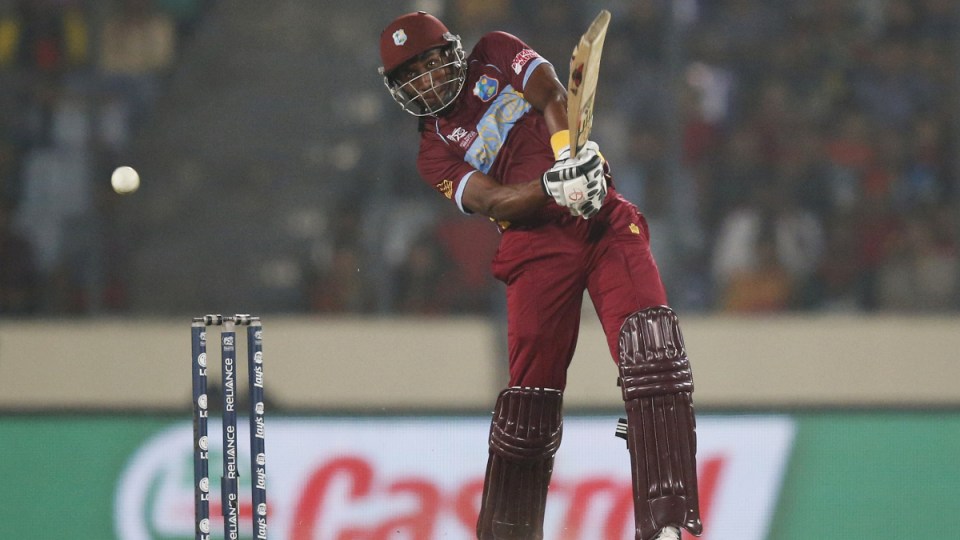 Dwayne Bravo scored 47 as West Indies beat Australia to go 2-0 up in their T20 series in St Lucia on Sunday. Photo: AP

Australia’s T20 woes after sending in teams continued, after another batting collapse contributed to a 56-run loss to the West Indies in their five-match cricket series in St Lucia.

Sent into bat on for the second time in as many matches, the hosts made 4-196 in an innings that contained 13 sixes and just eight fours.

Australia’s chase on Sunday never really got going and it was dismissed for 140 to trail 2-0 In the five-match series.

The West Indies were just too good today, taking the win by 56 runs.

Bring on Tuesday morning, where the comeback begins! #WIvAUS pic.twitter.com/hRigRer0VA

Australia has lost six of its past seven T20 matches in which it has opted to bowl first after winning the toss.

It’s the second straight five-match T20 series in which Australia has lost the first two games, but it fought back to 2-2 away to New Zealand earlier this year before going down in the final contest.

“You have to win three games in a series. It doesn’t matter if you do it three in a row at the start or whether you come from behind, we’ll keep working hard,” Australian captain Aaron Finch said.

Both teams were 3-59 after eight overs, but a fourth-wicket partnership of 103 off 65 balls between Shimron Hetmyer (61 off 36 balls) and Dwayne Bravo (47 not out off 34), proved the difference.

Conversely, the unchanged Australian side couldn’t generate a stand of more than 43.

Mitchell Marsh (54 off 42) followed up his first match half century with another fluent effort in his new position of No.3.

But he lacked support with no other batsmen making more than 19.

Australia has now lost all four of their white-ball games since 2013 when they have been without the influential quartet of Steve Smith, David Warner, Pat Cummins and Glenn Maxwell

“I think tonight we probably needed two good partnerships at the start and throughout the middle to set a real platform for us and we just weren’t able to do that,” Marsh said.

Australia’s chase got off to a poor start with openers Finch (6) and Matthew Wade (0) dismissed inside the first four overs.

Marsh added 39 for the third wicket with Josh Philippe and 43 for the fourth with Moises Henriques before the collapse.

Left-hander Hetmyer, who notched his highest T20 international score, reached hIs 50 off 29 balls with an audacious scoop for six over the wicketkeeper’s head off paceman Mitchell Starc, who leaked 49 off his four overs.

Veteran Bravo, who batted three spots higher than in the series opener, was dropped on 15 by Daniel Christian at long off.

Andre Russell (24 not out off 8), who clobbered a maiden T20 international half century in the first game, produced a trademark late innings cameo.

Spinner Ashton Agar (1-28 off four) was the most economical of the Australian bowlers who completed a full quota, with each of the other five used conceding at least nine an over.

The series continues at the same venue on Tuesday, AEST.