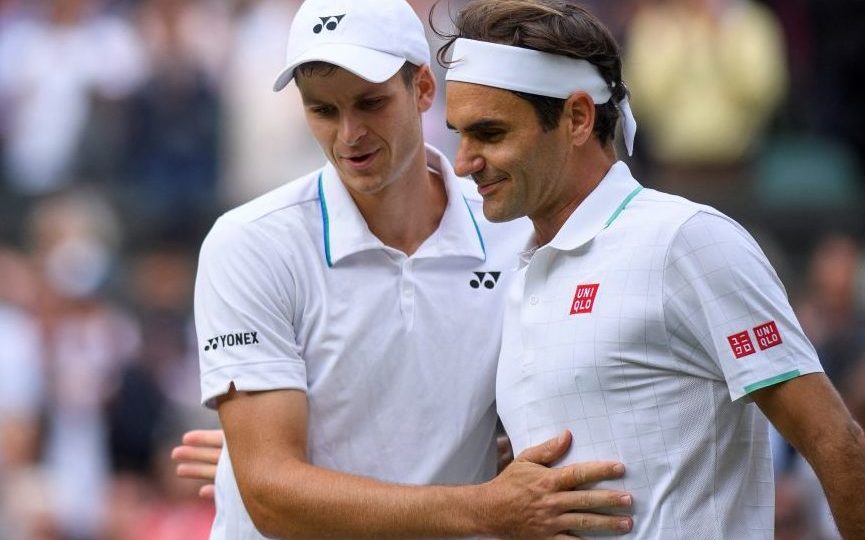 Roger Federer’s hopes of winning a ninth Wimbledon title were ended by a quarter-final loss to Poland’s Hubert Hurkacz.

The 39-year-old had played himself into form through the first week at the All England Club to raise hopes of an improbable trophy run after two knee operations and a month short of his 40th birthday.

But Hurkacz is a top-20 player and 15 years Federer’s junior, and was simply too good on the day for his opponent, who suffered a straight-sets loss at Wimbledon for the first time in 19 years.

After a poor first set in breezy conditions, Federer led 4-1 in the second but he could not find his timing and Hurkacz kept his wonderfully to win 6-3 7-6 (4) 6-0, handing the Swiss his first ever bagel at Wimbledon.

The other Wimbledon title regular, Novak Djokovic, eased himself into the semi-finals with a 6-3 6-4 6-4 victory over Marton Fucsovics and is now just two wins from claiming a 20th grand slam title.

That would see Djokovic draw level with Federer and Nadal’s haul of majors, yet the 34-year-old does not seem to enjoy the widespread popularity of his two illustrious peers.

Certainly the Centre Court crowd were more on the side of underdog Fucsovics, the unseeded Hungarian playing in his first grand slam quarter-final.

However, Djokovic said: “I don’t consider myself a bad guy. I’m not chasing anybody.

“I’m making my own path and my own journey, my own history. I’m privileged to be part of the history of this sport that I love.

“I know about a lot of stats. I don’t know about all of them. But they do motivate me even more to play my best tennis at the events that count the most in our sport.”

It was not the most convincing display from the defending champion against Fucsovics but, as has been the case throughout these Championships so far, it did not really have to be.

Shapovalov on Wednesday showed he is ready for the challenge after his five-set win over Karen Khachanov.

The 22-year-old proved he belongs on the biggest stage, coming from two sets to one down with his trademark flamboyance, and is likely to be a contender at this tournament for years to come.