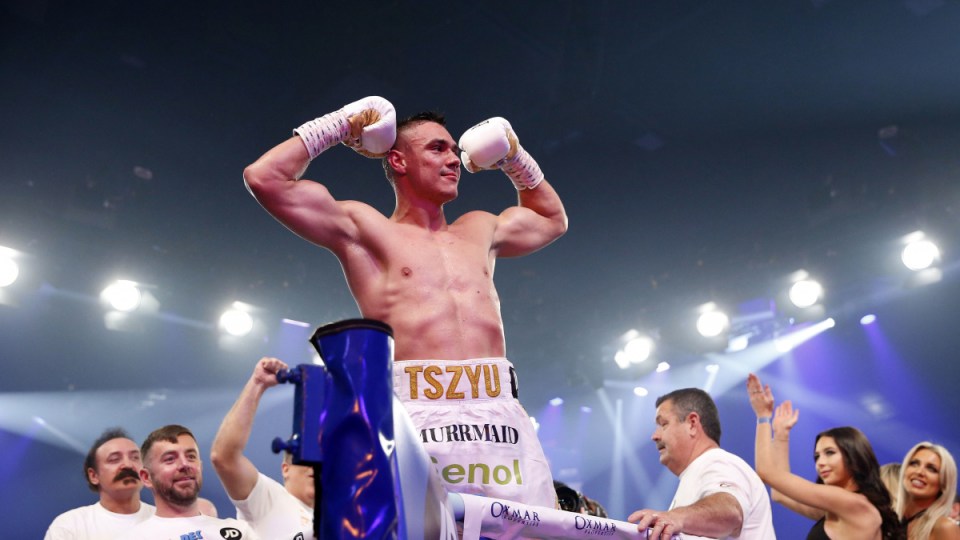 Tim Tszyu has continued his relentless pursuit of world title glory with a savage beatdown of Stevie Spark to retain his WBO global super welterweight title with a third-round stoppage in Newcastle.

Tszyu also claimed the vacant Commonwealth belt after living up to his pre-fight promise to quash Spark’s “Cinderella, Rocky Balboa” dreams of ending the favourite’s undefeated record to become the new face of Australian boxing.

A late replacement for no-show Michael Zerafa, Spark won plenty of plaudits for even stepping in to the ring on Wednesday night.

But he was no match for a budding superstar of Australian sport.

Another addition to the highlight reel of Tim Tszyu.

Tszyu dominated from the get go, hurting his bold challenger with a series of heavy blows from above and below in the first round.

Courageous and perhaps foolish in equal measures, Spark did incredibly well to survive beyond the second round as Tszyu unleashed a barrage of destructive left-handers to have the late fill-in literally on his knees.

The referee eventually stopped the fight, maybe even later than he could and should have, halfway through the third round following two telling body shots from Tszyu.

The victory improved Tszyu’s record to 15 knockouts from 19 fights as the 26-year-old WBO world No.1-ranked contender marched another step towards emulating his famous father Kostya and becoming a world champion.

Tim Tszyu had his opponent Stevie Spark hurt near the end of the second round in Australia today, then Spark's corner knocked over their ice bucket, which gave him an extra minute to recover.

Tszyu responded by knocking Spark out with brutal body shots in round three. pic.twitter.com/YMhwM32Tbd

In the co-main event, Queenslander Liam Wilson suffered a reality check in his own pursuit of a world title with a savage fifth-round loss to the Philippines’ self-styled “Jaw Breaker” Joe Noynay.

Adding further lustre to his triumph, Noynay, the world No.7 and ranked by all three governing bodies, won after enduring 14 days in quarantine after being the first international boxer outside of New Zealand to fight in Australia.