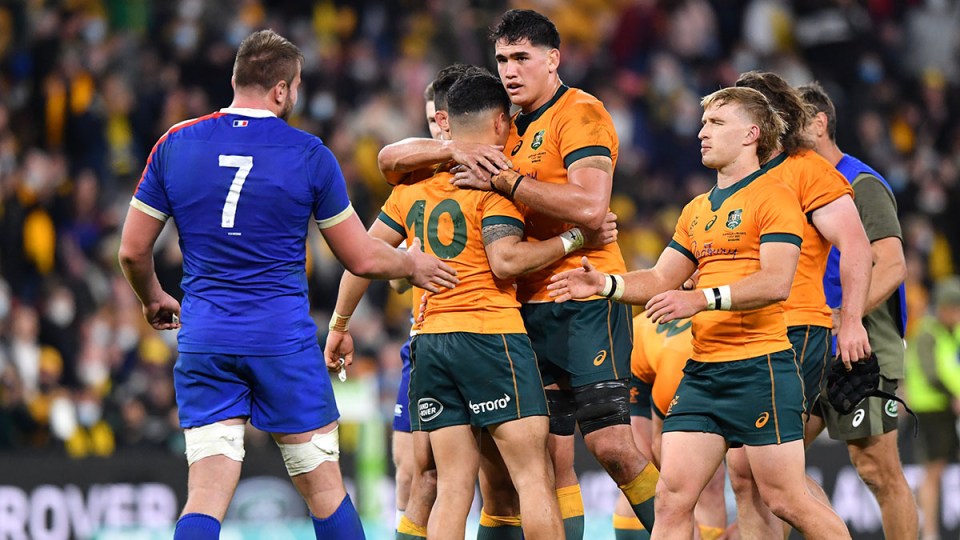 Noah Lolesio (No.10) celebrates with Wallabies teammates after kicking the winning goal against France. Photo: AAP

The Wallabies have stolen the most remarkable Test victory over France 23-21, Noah Lolesio kicking a penalty after the visitors had failed to kick the ball into touch to seal the win.

The French, missing a host of stars on Wednesday night, had the game won before a massive blunder saw the ball spill free and allow Dave Rennie’s men one last chance to go ahead for the first time all night.

Lolesio, who had missed a field goal with three minutes to play, drilled the penalty goal after the Wallabies had tried and failed to pulverise their way over for the match winner.

It cost the French their first win in Australia since 1990 and ensured Australia’s winning streak at Suncorp Stadium moved to eight.

🎟Make sure to secure your tickets for the remaining eToro France Series games: https://t.co/9biW2GsHUT pic.twitter.com/NRX5JdMuoy

The Wallabies had earlier butchered chances, Hunter Paisami’s low-percentage crossfield kick missing the mark in a scrappy, anxious first Test of the season that seemed all but certain to end in a loss.

Instead the French panicked at the lineout after winning a defensive penalty, putting the ball through hands and eventually onto the floor before replacement halfback Tate McDermott swooped.

McDermott’s arrival in the second half sparked the side after a terrible first-half that saw the Wallabies trailing 15-0 after 23 minutes.

Hooker Jake Gordon and Lolesio both knocked on in an anxious opening, Gordon making a bad defensive read to allow Villiere’s second try.

The Wallabies slowly eased into the contest, France giving away repeated penalties – they were finally warned after the fifth – before hooker Brandon Paenga-Amosa burrowed over from a maul.

Teams traded penalties in the second half, Tom Wright butchering a try that would have made it 18-17 when he was unable to dive on a neat Paisami grubber.

Instead, Louis Carbonel put the visitors ahead by eight entering the final 20 minutes.

Hooker Lachlan Lonergan, lock Darcy Swain and utility back Andrew Kellaway, on for Wright, all debuted in the second half.

Energised, they backed over for a try through Michael Hooper to make it a one-point game inside the final 10 minutes.

It looked to be too little too late until France, which had only left Sydney quarantine on Tuesday night, handed it one last chance.