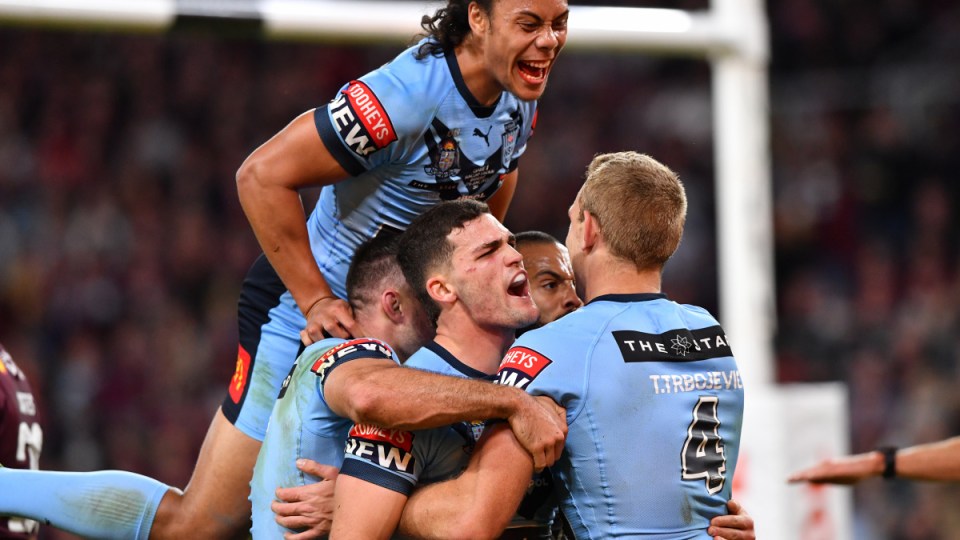 The Blues have claimed the Origin crown for 2021 after another huge performance to win 26-0 against their bitter interstate foes.

New South Wales ran in four tries and kept Queensland scoreless in Game II to take a 2-0 series lead on Sunday night before the final match, scheduled for Sydney on July 14.

The intense post-mortem will begin in earnest in Brisbane after the Maroons suffered their second successive embarrassing defeat.

It is the first time since 1994 that Queensland has been kept scoreless in an Origin encounter.

It's coming home 🏆 The Brydens Lawyers NSW Blues have secured the 2021 State of Origin shield!

An eligibility drama on the eve of the match saw Ronaldo Mulitalo rubbed out, Xavier Coates drafted in and Valentine Holmes moved back to fullback.

Despite representing Queensland at junior level, an investigation revealed that the New Zealand-born-and-raised Mulitao had moved to the Sunshine State after the age of 13 and was therefore ineligible to play.

The farcical situation added even more stress to the already maligned Maroons and was exactly not what Paul Green’s men needed.

Despite the derailed preparation, it was a solid start to the contest by Queensland as it built early pressure in NSW’s half.

The Maroons looked to offload at will and stretch the Blues’ defence.
But it was NSW that drew first blood through Josh Addo-Carr in the 11th minute.

After Latrell Mitchell’s ball steal, James Tedesco found space on Queensland’s left edge and his cut-out pass was perfect for Addo-Carr to stroll over untouched.

Nathan Cleary’s kick was on target to make it 6-0. The try urged on the Blues and momentum was with them.

They forced a goal-line dropout and then, with the Maroons tiring, Brian To’o went close to adding the visitors’ second. But Holmes scrambled hard and managed to stop To’o crossing in the corner.

The big games require the biggest of plays… Step up Latrell. 🤯

It got worse for Queensland on the 25th minute when on the attack.

With Cleary’s conversion the home team was already 12-0 behind and with a mountain to climb.

It should have been another try for the Blues five minutes later.

Tom Trbojevic broke through on the right flank and passed inside for Cam Murray, but the forward dropped the ball.

But two minutes later it mattered not as NSW was in for its third try of the game.

A shift to the right exposed the Maroons again, Addo-Carr finding space and then passing inside for Trbojevic to touch down.

At 18-0 down Queensland was at crisis point.

Feeling the heat, its ball control was poor and its attack wayward at times.

The Blues were in cruise control and looked at ease.

In the final few minutes before half-time a series of scuffles broke out as the Maroons’ frustration increased.

At half-time Queensland was bruised, bloodied and behind 18-0.

The Maroons had missed a staggering 27 tackles in the first half, compared with 19 by NSW, and only made 684 metres compared to their opponent’s 1051.

In the second half the Maroons had to be the next to score to have any hope at all, but it was not to be.

In the 45th minute Trbojevic appeared to grab his second try, after another electric Addo-Carr scoot down the wing, however it was ruled out by the referee because Murray was offside.

The Blues remained the dominant outfit and Cleary made it 20-0 with a penalty goal, after Daly Cherry-Evans was penalised for an escort off the ball.

My goodness. HOW did he stop that?! #Origin pic.twitter.com/jdMOVmJyAI

On 53 minutes Coates dived over in the corner as Queensland appeared to have finally got on the scoreboard.

But Trbojevic managed to knock the ball from Coates’ hands in a brilliant try-saving move.

In both attack and defence, NSW was virtually unstoppable.

"We didn't miss the jump mate, they were just too good"

A hard one to swallow for DCE.

On 61 minutes the Maroons had a try disallowed by the video referee, after Dane Gagai’s elbow was on the line as he grounded the ball in-goal.

Four minutes later Andrew McCullough was held up over the line as the Blues’ defence simply refused to yield.

And the demolition continued in the 69th minute when Addo-Carr scored his second try, after an offload from Tedesco.

Cleary continued his night of perfect goalkicking to make it 26-0.

Queensland’s evening of misery continued three minutes later when Kyle Feldt got over the line but To’o somehow managed to knock out the ball and prevent a try.

NSW now appears on track to notch its first series clean sweep since 2000.