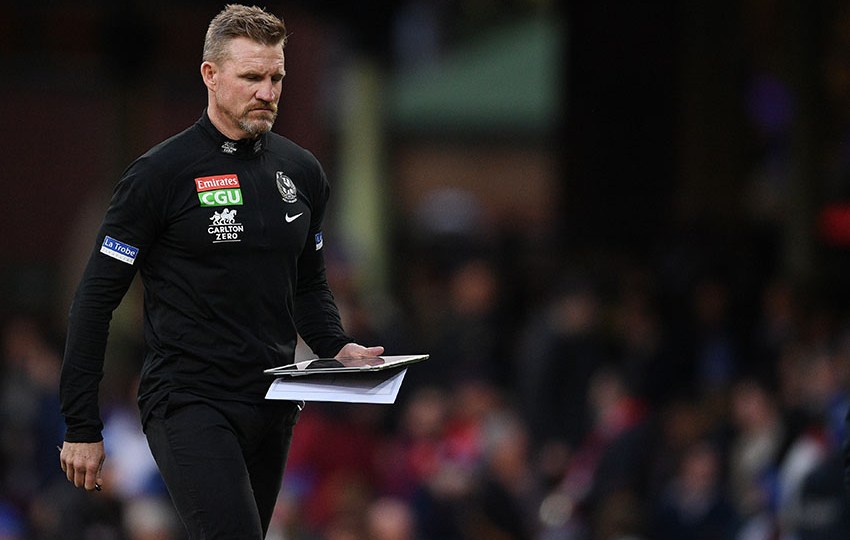 Nathan Buckley insists he is leaving AFL club Collingwood with no regrets as a player or coach. Photo: AAP

Nathan Buckley approached his final days as Collingwood coach with such a sense of calmness that it unnerved those around him.

The relaxed strategy before tackling ladder-leading Melbourne at the SCG on Monday worked, with the Magpies causing one of the upsets of the season to send Buckley off on a high.

The Magpies legend walked off the ground for the final time representing his beloved club, flanked by sons Ayce and Jett, with a loud ‘Collingwood’ chant echoing around the stadium.

It was fitting that a career that has been punctuated by heartbreak, most notably grand final losses as a player in 2002 and 2003 and in 2018 as coach, finishes with an against-the-odds victory.

A black and white fairy tale to send off a great 👏 pic.twitter.com/u4fFOVFIgP

“It’s probably a little bit unnerving for the people around me because the expectation was that things were going to be different and change,” Buckley responded to being asked if he approached the game any different than normal.

“I just really wanted to see us get the job done.

“I felt quite centred and calm for the whole week.

“I understand and appreciate the reality of the situation and was really looking forward to this opportunity for the boys to take another step.”

Buckley finishes his time as Collingwood coach with as many wins (117) as he racked up during his hall-of-fame playing career across 280 games with the Magpies and Brisbane Bears.

The best send off Bucks could’ve asked for 🖤 pic.twitter.com/yk6BJMXrZx

The expectation is the 48-year-old will move straight into various media roles before assessing whether he pursues another job in coaching.

Even though he narrowly missed out on a premiership during his nine-and-a-half years in charge, Buckley leaves with more respect than most coaches who depart without the ultimate success.

“I’ll sit down and have a couple of beers with everyone tonight,” Buckley said.

“I’ll go in at some stage this week when no one’s around and clear out the office and consider what my next step is.

“I don’t have any regrets. You live and you learn. One of my personal strengths is to always keep an open mind and open heart to more growth and improvement.

“I’m just so grateful for the people around the football club. I’m a better person because of my experiences at Collingwood.”

I’ve still got a lot of life to live and passions to chase.

“Collingwood will always be a passion and I will always want to see it as an organisation prosper so I’ll be supporting from a far.”