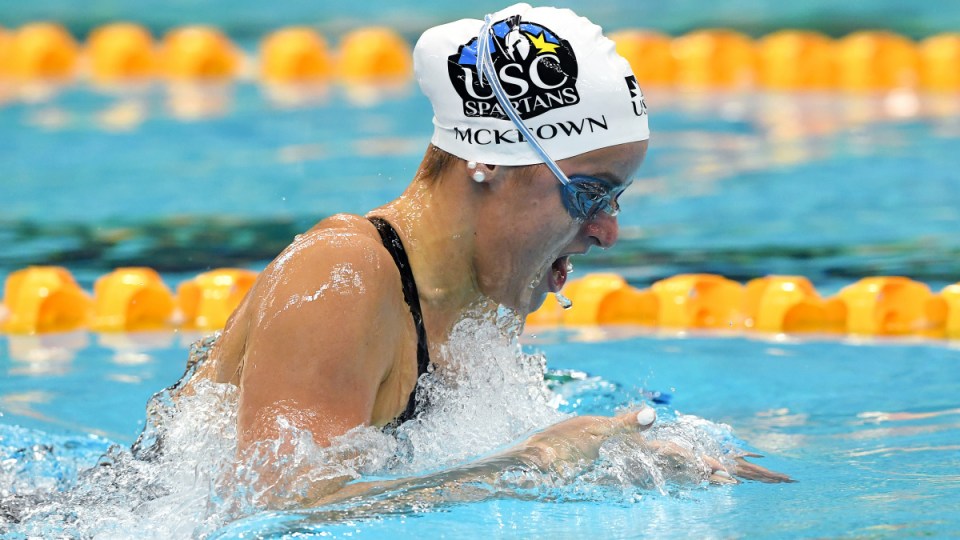 The 19-year-old had just four-and-a-half hours sleep after her adrenaline-charged backstroke feat.

“That is probably the toughest thing I had to overcome this morning. There was a lot of fatigue,” she said.

How good is this 💛💚
Kaylee just qualified for her 1st Olympic Games at #Tokyo2020 and @emcbomb her 4th!#TokyoTogether https://t.co/DpRx72EtKb

“I just looked at (coach Chris) Mooney and said ‘I don’t know how this is going to go’.

“He was really good. He understands. He just said ‘give it your best, there’s no pressure’.

“I just did the best I could recovery wise.

“I tried to get to sleep and I couldn’t. The adrenaline was still pumping.”

McKeown won in two minutes 08.19 seconds, the fastest time in the world in the event since August 2019.

“I need to improve on my turns a lot more. I just noticed myself that I was taking a bit of a breather on the wall,” she said.

“But there’s no complaints. I went under the qualifying time and a small PB (personal best) so I can’t ask for much more.”

McKeown was 3.6 seconds ahead of the next best, Tessa Wallace, who failed to finish inside the Olympic qualifying time.

She can’t comprehend how she got so close – 0.11 seconds – to a world record considered nigh-on untouchable.

Only an Italian in a super-suit a dozen years ago has gone quicker.

All this, with a dodgy shoulder.

“It (her shoulder) is holding up really well.

“At the start of the week I was a bit worried, it was a bit sore.

“But I am just managing it as best I can … it’s hanging in there, it’s getting the job done.”

With Emma McKeon trailing into second place, Titmus clocked one minute 53.09 seconds in the 200m final – 0.11 second from the world record set in a super-suit by Italian Federica Pellegrini in 2009.

Titmus will carry gold-medal favouritism into next month’s Tokyo Games. So will compatriot McKeown.

In the men’s 800m freestyle, Jack McLoughlin was the only swimmer inside the Olympic qualifying time.

Mack Horton, who missed selection to defend his 400m freestyle title on Tokyo, finished fifth – his only chance of making the Olympics is as a relay squad member.

And in the men’s 200m butterfly final, Matt Temple edged David Morgan by 0.15 second, with both inside the qualifying mark.

Disease concern for survivors of Afghanistan earthquake
Steve Smith confirmed as starter for first Test against Sri Lanka
Matildas will be keen to forget 7-0 drubbing by Spain
Upcoming stats will reveal where and how hard rates are hitting economy
Victorian MPs pocket a tidy 2.75 per cent pay raise
Reserve Bank review isn’t a ‘get the governor’ exercise: Jim Chalmers
Nathan Buckley leaves Collingwood with no regrets
Today's Stories