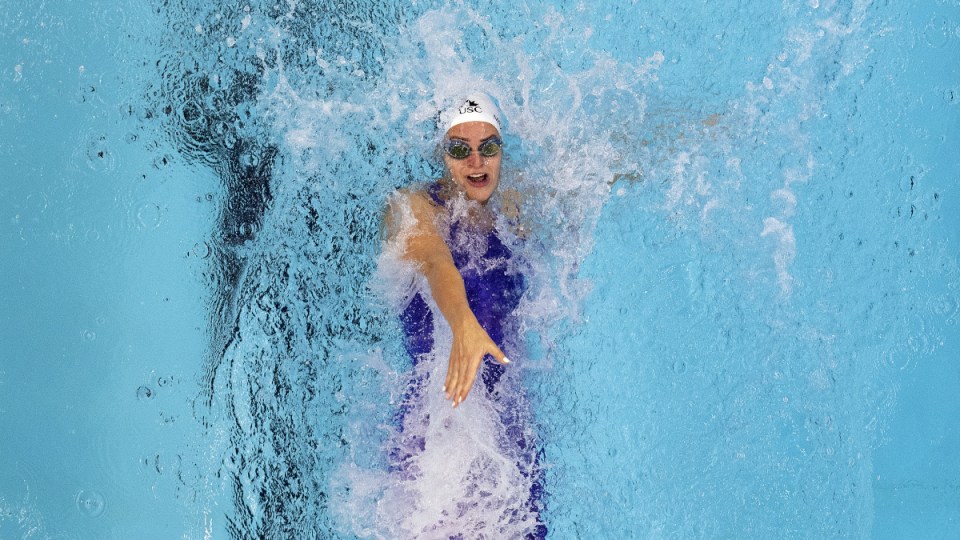 The 19-year-old clocked 57.45 seconds in Sunday night’s final at the South Australian Aquatic Centre in Adelaide.

Kaylee McKeown continues to dominate world backstroke, and she's just taken it to another level! 🔥

McKeown says the death of her father 10 months ago inspired her to break the record.

McKeown’s father Sholto passed away in August from brain cancer.

“With COVID and the passing of my Dad in August last year, it has been a huge, huge build-up to these trials,” she said.

“And I have turned it into a bit of a hunger and motivation behind me.

“I use it every day that I wake up. I know it’s a privilege to be on this earth and walk and talk.

“So to get up and do that tonight is not really for me but my family.”

McKeown waved to her mother Sharon, who was in the grandstand at the South Australian Aquatic Centre to witness her daughter’s feat.

“I knew she was up in the crowd, I don’t like looking up before I walk out because I get a bit nervous but … I coudn’t help,” she said.

McKeown last month set a then Commonwealth and Australian record of 57.63.

But it wasn’t until just before warm-up on Sunday night that her coach Chris Mooney signalled the world record was a target.

“He did say something to me before I got in for warm-up, it was like ‘you know buddy, I believe in you’,” she said.

“I knew and he knew at that time, that it was go time.

“He knew something special was about to happen. I may not have known it but I was just trying to keep the nerves down as much as I could.

“I wouldn’t say it was a goal, I think I am more of a process-oriented person than times.

“And it just so happens that I nailed all those little pinpoints that I am going for.”

McKeown’s record sets up a highly-anticipated showdown with American star Smith at next month’s Tokyo Olympics.

“It’s just whoever comes up on the day, you never know what can happen in five, six weeks time,” she said.

With his Olympic title defence over, Mack Horton is challenging his conquerors to continue his gold-medal swimming legacy at the Tokyo Games.

Horton has failed to earn selection on Australia’s team for Tokyo in the 400 metres freestyle, the event he won at the 2016 Olympics.

In a stunning final at the Australian Olympic selection trials in Adelaide on Saturday night, Horton was among five swimmers to finish inside the qualifying time.

The top three clocked the fastest 400m freestyle times in the world this year.

But Horton finished third. And only the top two – Elijah Winnington and Jack McLoughlin – secure selection.

“I literally gave it everything.

“I’m very happy for the boys … hopefully they can keep carrying the 400 legacy for Australia.”

The 21-year-old Winnington said he had toppled his hero.

“I had a little moment with Mack after that race and I pretty much told him he’s my hero,” Winnington said.

The multi-talented McKeon, who could race as many as eight events in Tokyo, won in 55.93sec, bettering her previous Australian record of 56.18sec.

McKeon was on world-record pace until fading in the last five metres but was unaware she was close to Swede Sarah Sjostrom’s world benchmark of 55.48sec.

“That gives me confidence,” McKeon said.

“It’s significantly faster than what I have been going for the last four years.”

McKeon, who won four medals – gold and two silvers in relays and a bronze in the 200m freestyle – at the 2016 Rio Olympics, said she was benefiting from the Tokyo Games being postponed a year because of the coronavirus pandemic.

“Having that extra year definitely helped … I really feel a lot stronger and just a lot more confident in my ability compared to March last year,” she said.

“I was definitely ready and well-prepared if the Olympics were on last year. Having that extra year just got me even more ready.”

In the men’s 400m medley, 20-year-old Smith set an Australian record of 4:10.04 – a tenth of a second quicker than Thomas Fraser-Holmes’ previous mark.