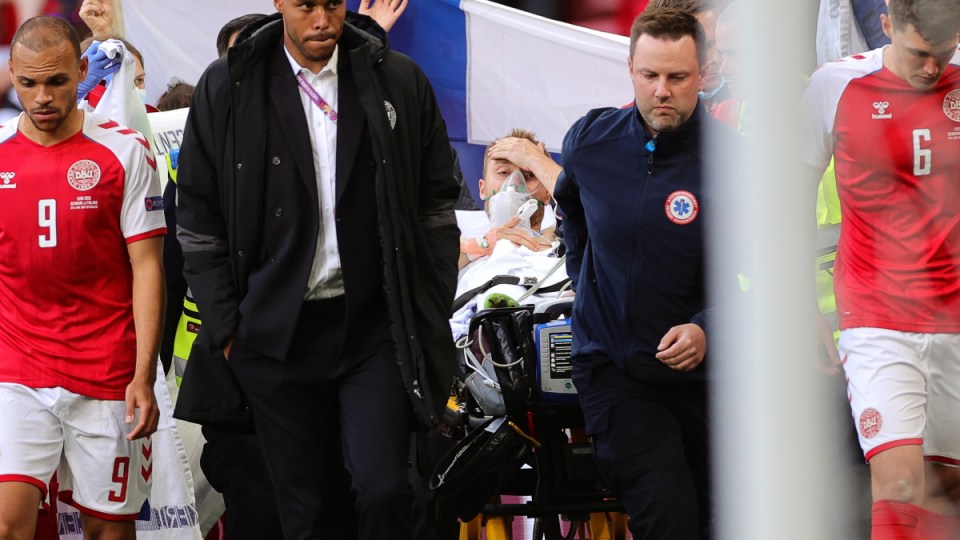 Denmark's Christian Eriksen was taken to hospital after being revived on the pitch in Copenhagen. Photo: EPA

Christian Eriksen may not play again professionally after his cardiac arrest during Denmark’s Euro 2020 game against Finland, a leading sports cardiologist says.

Denmark and Inter Milan midfielder Eriksen dropped to the ground at the Parken Stadium in Copenhagen shortly before half-time and was treated on the pitch before being taken to hospital.

The Danish Football Federation said on Sunday morning that Eriksen is “stable” and he remains in hospital.

In a statement on Twitter, the Danish FA said: “Latest news: This morning we have spoken to Christian Eriksen, who has sent his greetings to his teammates.

“His condition is stable and he continues to be hospitalised for further examination.”

Professor Sanjay Sharma, a professor of sports cardiology at London’s St George’s University who worked with Eriksen during his time at Tottenham Hotspur, said football bodies would likely to be “very strict” about allowing the 29-year-old to play again.

“But they managed to get him back, the question is what happened? And why did it happen?

“This guy had normal tests all the way up to 2019 so how do you explain this cardiac arrest?”

Denmark team doctor Morten Boesen said Eriksen received life-saving cardiac massage treatment on the pitch but was able to speak before being taken to hospital.

“We were called on to the field when Christian collapsed. He was lying on his side when we approached him and there was respiration and pulse,” Boesen said post-match.

“But that picture changed and he then received life-saving cardiac massage. We quickly got help from the stadium doctor and we got Christian back.”

Professor Sharma, who chairs the Football Association’s expert cardiac consensus group said he was “pleased” by news that Eriksen was awake in hospital.

“The fact he’s stable and awake, his outlook is going to be very good,” he told the PA news agency.

“I don’t know whether he’ll ever play football again.

“Without putting it too bluntly, he died today, albeit for a few minutes, but he did die and would the medical professional allow him to die again?

Professor Sharma added that it would be up to both the player and his club to assess the risks of continuing to play.

“His cardiac arrest has rocked the entire nation today and that’s what happens. It’s not just them that it affects, it’s the psyche of so many people,” he said.

“The good news is he will live. The bad news is he was coming to the end of his career, so would he play another professional football game? That I can’t say.

“In the UK he wouldn’t play. We’d be very strict about it.”