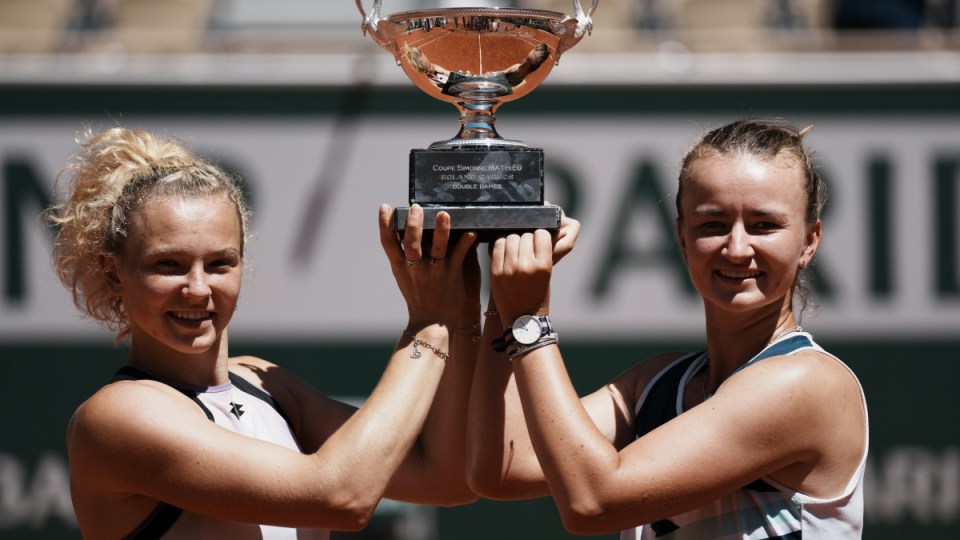 Barbora Krejcikova has completed her fairytale weekend at the French Open by adding the women’s doubles crown to her maiden grand slam singles title.

The new star of the women’s game, still on a high less than 24 hours after defeating Russian Anastasia Pavlyuchenkova for a surprise breakthrough triumph, teamed up with Czech compatriot Katerina Siniakova to annex the doubles on Sunday.

The pair, who were adding a third grand slam to their impressive resume after victories together at Wimbledon and the French Open in 2018, swept aside Poland’s 2020 singles champ Iga Swiatek and American veteran Bethanie Mattek-Sands 6-4 6-2.

It not only made Krejcikova the first woman to complete the ‘double’ at the same Roland Garros championships since Mary Pierce in 2000 but victory will also elevate her back to the top of the rankings as the world’s No.1 doubles player on Monday.

Following her singles victory on Saturday, Krejcikova triumphs alongside Siniakova to sweep both Roland-Garros women's titles and claim another slice of history. More 👇#RolandGarros

Krejcikova and Siniakova, the No.2 seeds, proved far too accomplished for the raw but exciting pairing of Swiatek and Mattek-Sands, who’d made the final in just their third tournament together.

After racing to a 4-0 lead in the opening set, the Czech mates, who’ve been a brilliant partnership ever since winning the junior titles together at Roland Garros eight years ago, continued to outplay the Polish-US combination.

Krejcikova and Siniakova, who had been beaten in the final of the Australian Open in February, made no mistake this time with Siniakova, brilliant at the net throughout, cracking the final backhand winner after just 74 minutes.

It completed a wonderful tournament for Krejcikova, who was on court for 23-and-a-half hours all told over the fortnight, having played in 15 matches.

Three weeks ago, Krejcikova had never won a singles title but following her first WTA triumph in Strasbourg, she was left practically in a state of disbelief on Saturday after adding her maiden slam singles title.

She reckoned she had been inspired by the memory of her late mentor and coach Jana Novotna, saying that she felt the former Wimbledon champion, who had died of cancer in 2017 aged 49, had been guiding her throughout the slam.