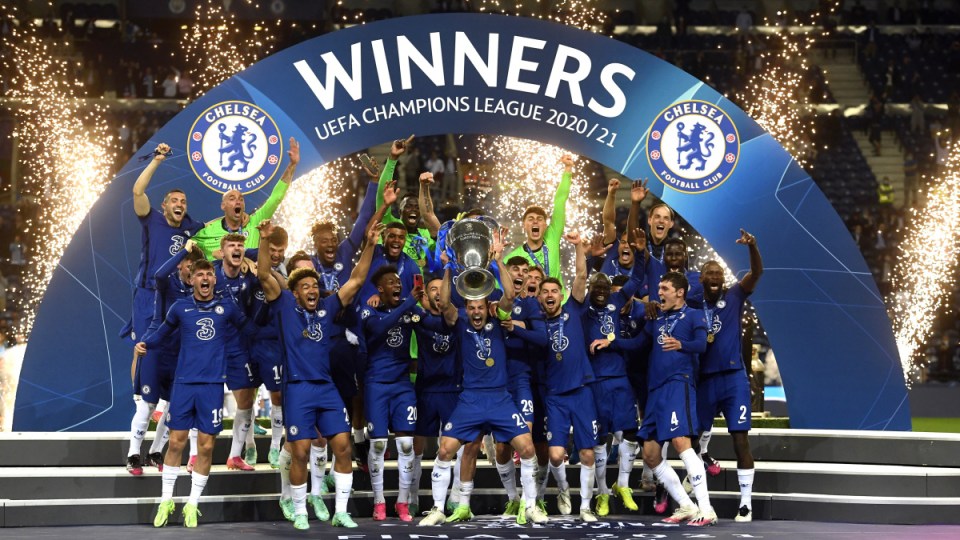 Chelsea celebrates with the trophy after winning the UEFA Champions League final in Porto on Sunday. Photo: EPA

As Chelsea captain Cesar Azpilicueta cradled the European Cup before thrusting it into the air to the backdrop of fireworks, Pep Guardiola and his distraught Manchester City players stood way behind the winner’s rostrum and looked on in anguish.

Champions League glory for the second time for Chelsea, nine years after its first and just 123 days after manager Thomas Tuchel’s season-changing arrival at Stamford Bridge.

Yet more misery in world soccer’s biggest club competition for City and Guardiola, its genius manager whose overthinking proved costly.

Germany forward Kai Havertz’s 42nd-minute goal earned Chelsea a 1-0 win in the Champions League’s third all-English final – with a crowd of COVID-19 limited crowd of 16,500 in attendance in Porto.

That the last match of a club season heavily impacted by the coronavirus pandemic was settled by a goal from Havertz felt apt, given he suffered badly after contracting the illness midway through his first year at the club having signed for a club-record fee.

He has recovered to play a big role in Chelsea’s end to the season, and showed why the club made him the centrepiece of their $300 million ($390m) spending spree last off-season in the way he ran onto a through-ball by Mason Mount, rounded goalkeeper Ederson Moraes and rolled the ball into an empty net.

Asked if the winning goal had paid back the transfer fee on its own, the German told BT Sport: “To be honest, right now, I don’t give a f—. I’ve won the Champions League!”

As for his fellow German Tuchel, he only had to wait one season to get over the disappointment of losing the 2020 final when in charge of Paris Saint-Germain.

Fired by PSG in December, he was hired by Chelsea a month later to resuscitate a team that had lost their way – and had dropped to ninth in the Premier League – and has delivered a Champions League title four months later.

It was billed as a tactical duel between Tuchel and Guardiola, two of the world’s most innovative coaches, and there was a clear winner.

Guardiola will surely regret tinkering with a line-up that had swept City to their first Champions League final and to the verge of another trophy treble, after winning the Premier League and the English League Cup.

Starting without a recognised striker was expected but going without a specialist holding midfielder in Fernandinho or Rodri was a major surprise.

PEP 💬 I did the best in the selection. Against Lyon like it was against PSG, Dortmund, I tried the selection the best to win the game. The players know it, I think Gundogan played good, we were exceptional. pic.twitter.com/j5IgcsAtfv

“I did what I thought was the best decision,” Guardiola said.

Ilkay Gundogan, City’s top scorer this season and a revelation in his attacking-midfield role, instead ended up dropping in as the anchorman in midfield.

Sergio Aguero came on in the 76th minute for his final appearance after 10 trophy-filled years at City, but the Argentina striker couldn’t produce any late heroics this time.

City’s players slumped to the ground at the final whistle as Chelsea players celebrated.

Tuchel played with his daughters on the field while Christian Pulisic, a second-half substitute and first American player to feature in a Champions League final, posed with the trophy in a US sweatshirt.

Chelsea became just the 13th multiple European champions, adding to its title from 2012.

“It’s a huge step to arrive in the final and it’s an even bigger one to bite your way through and to make it all the way to the cup,” Tuchel said.

Chelsea thwarts Manchester City to be crowned kings of Europe