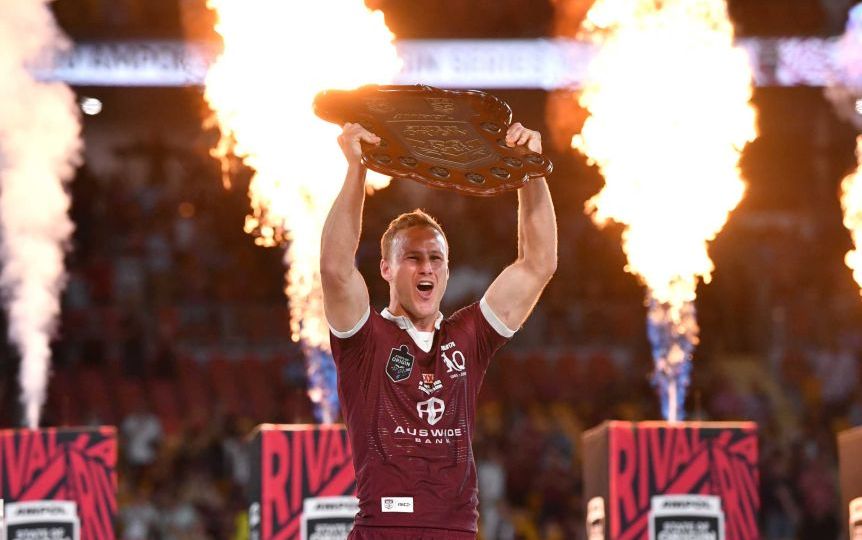 The Maroons were unlikely State of Origin champions in the eyes of many in 2020. Photo: AAP

The NRL will make a call on moving the State of Origin opener from Melbourne by the end of the week, saying no state or territory has been ruled out as a back-up solution.

The game’s showpiece event is due to be held at the MCG on June 9, six days after a week-long lockdown in Victoria is scheduled to be lifted.

Amid Victoria’s worsening COVID-19 outbreak, some AFL games have been moved interstate to avoid border closures this weekend, while other scheduled games will be held without crowds.

Playing State of Origin in front of an empty stadium at the MCG is an unpalatable but not impossible scenario for the NRL.

NRL not giving up on MCG hosting State of Origin I, but 'nothing is off the table' https://t.co/XlrsdwwkFr

However, relocation appears inevitable despite chief executive Andrew Abdo’s insistence on giving Melbourne ‘every chance’ to host the event.

“I don’t think anyone, including the Victorian Government, would want us playing in front of an empty stadium.

“The whole point of us taking a State of Origin there is ideally to be playing in front of 80 or 90 thousand people.”

Queensland has already put up its hand to host Origin I in either Brisbane or Townsville, while Sydney is also an option for the NRL.

But neutral territories may be preferred for both the NSWRL and QRL.

Since 2018, the NRL has taken one game a year to a state other than Queensland or NSW, with games held in Perth, Melbourne and Adelaide.

The move broke the long-held tradition of one competing state hosting two games each alternate year to even out the home-ground advantage.

Abdo said he expects a location to be confirmed by the time teams go into Origin camp on Monday.

“We’re working around the clock on that. Clearly we have some concerns given the outbreak in Melbourne,” he said.

“We’re very concerned about what’s happening there and we’re in constant dialogue with them. First and foremost we want to make sure we do the right thing and give Melbourne every chance of hosting game one, which is coming up in a couple of weeks.

“Nothing is off the table. We’re looking at a wide range of potential locations and we hope to make a decision in the coming days.”