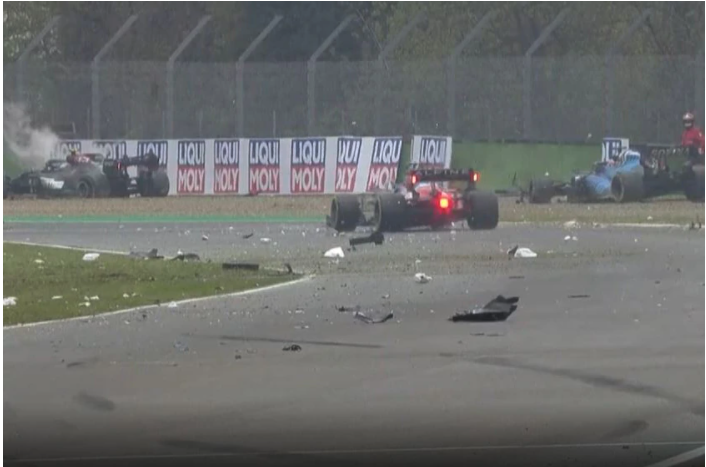 Debris from the incident between George Russell and Valtteri Bottas caused the race to be red-flagged. Photo: ABC

Max Verstappen has won his first race of the 2021 season, winning an Emilia Romagna Grand Prix that was chaotic from the start.

Starting from third, the Dutchman led the race after a blistering start where he shot his Red Bull down the inside of the track to beat championship rival Lewis Hamilton and Red Bull teammate Sergio Perez into the first corner.

It was a lead Verstappen would keep for all but one lap.

Hamilton, who finished second, was one lap behind Verstappen when the race was red-flagged after Valterri Bottas and George Russell came together at high speed, leaving debris all over the circuit.

Both drivers were irate on team radio delivering a series of expletives about the other driver to their teams before Briton, Russell, removed himself from his car and confronted the Mercedes driver, while he was still sitting in his cockpit.

A furious Russell, who drives for Williams, confirmed post-race that he blamed the Finn for the mistake asking him, “are you trying to kill us both?”

Bottas said he never heard Russell’s remarks but did give him a salute with his middle finger before Russell appeared to try and slap Bottas’s hand away.

Post-race Russell was still far from happy with the Mercedes star and blamed him for the incident.

“Just as I pulled out he jolted very, very slightly to the right, which is a tactical defence that drivers in the past used to do,” he said.

“There is a gentlemen’s agreement that that is not what you do because it is incredibly dangerous.

“In completely dry conditions I probably would have been fine but it just put me on to the wet patch and unfortunately I lost it.”

Bottas told reporters he was disappointed in Russell’s actions after the crash, blaming the young Briton for the wreck.

“George went for an overtake in a place where this one dry line and I have seen the replay and there was definitely space for two cars all the time,” he said.

“I don’t know he was trying to say something but it was completely his fault, quite disappointing.”

While the crash was hardly the only one on the day with Mick Schumacher, Hamilton and Nicolas Latifi all finding the wall at different times, the race belonged to Verstappen, who displayed all of his wet-weather driving ability during his first ever win in Italy.

Where the others struggled Verstappen made his move early and never had to again.

His only real challenge was Hamilton but when the world champion found the wall on lap 32 he fell well behind before a heroic drive to get back into second.

Verstappen said post race he was surprised by how good his start to the race was.

“It was very challenging out there, especially in the beginning,” Verstappen said post race.

“It was very hard to stay on track, to be honest.”

Norris finished third and benefited greatly from a team order early in the race when McLaren told Ricciardo to let him pass.

The Australian said he did not have the pace on the day and the order was “fair enough”.

While the official classification says Verstappen beat Hamilton by 22 seconds, it seemed unlikely the world champion would finish the race on lap 32.

As he was attempting to overtake a lapped car in his pursuit of Verstappen, Hamiton sent his car off track and into the wall but in a masterful piece of car management was able to keep his engine running and not bog his car in the gravel trap and made it back to the pits.

The red flag for the incident between Bottas and Russell then worked in Hamilton’s’  favour.

All cars which had been were down a lap were allowed to get back onto the lead lap before the restart.

Hamilton began the final 29 laps of the race in ninth before his strong finish, which also saw him post the fastest lap of the race to earn a bonus point.

That point now separates himself and Verstappen in the world championship.

For the first time in more than half a century, Formula One will race in the US state of Florida.

The sport announced it will race in Miami in the 2022 season, hours before the race at Imola.

Miami will be the 11th different city in the United States to hold a Formula One race.

The new location will mean there will be two Grands Prix in the US in 2022, along with the US Grand Prix held in  Austin, Texas.

Formula One chief executive, Stefano Domenicali, announced the track will be a street circuit next to the city’s multipurpose stadium, where the Miami Dolphins NFL team play.

“The USA is a key growth market for us, and we are greatly encouraged by our growing reach in the US which will be further supported by this exciting second race,” he said.

‘Are you trying to kill us both?’: Massive F1 crash between George Russell and Valtteri Bottas