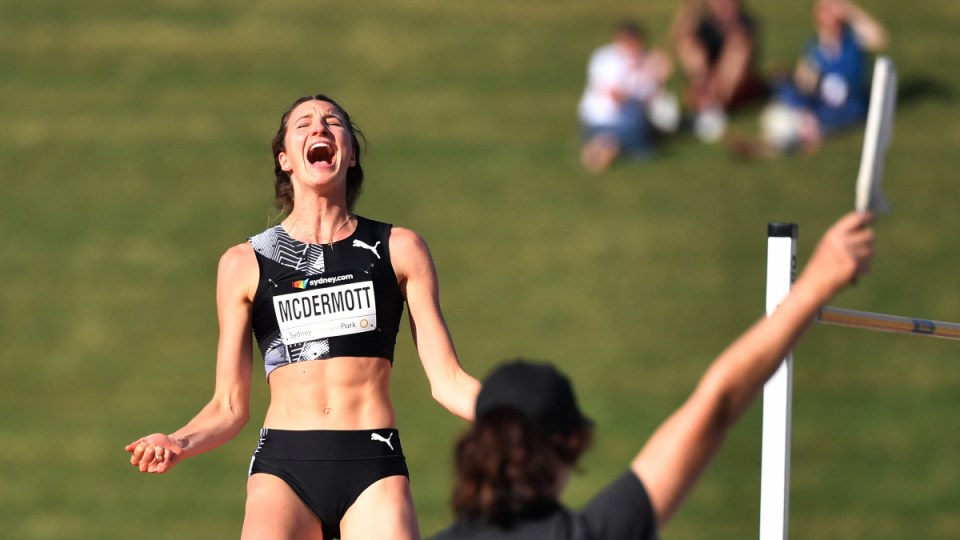 Nicola McDermott was ecstatic after clearing 2m in the high jump at the Olympic trials. Photo: AAP

The men’s 1500m is the most fiercely contested event on the Australian track and field program and the little-known Edwards took it to a whole new level on Sunday.

As expected, national record holder McSweyn surged away from the pack from the starters’ gun.

What was more unexpected was that Edwards went with him and stayed there throughout the race, before surging to the front in the final straight.

3:33.99 for Jye Edwards to win the 1500m final! It was a brave run from McSweyn, but you can’t do much about that. His first Olympic qualifier secures him an auto nomination. #ThisIsAthletics pic.twitter.com/cMQGC3rpjp

Edwards’ winning time of three minutes 33.99 seconds guaranteed him a spot on the Olympic team.

“I was 95 per cent sure that is how the race would play out,” said the 23-year-old university student, who stripped almost one and a half seconds off his PB.

“(McSweyn) did all the work and I was lucky to be there with 100 metres to go.

“That would have been his game plan and I had mine.

“To be able to come over the top, I was stoked.

“The hardest part was just being there.”

McSweyn was surprised by the strength of the headwind on the back straight, when Edwards was tucked in behind him.

“He had a good sit,” the versatile McSweyn said.

Further muddying the waters, Oliver Hoare and Matthew Ramsden have also bettered the 1500m Tokyo standard, but there are only three spots available.

Drawing inspiration from a biblical passage written on her left wrist, McDermott added 2cm to her personal best as she became the first Australian female high jumper to clear the two-metre barrier.

“What was written was fearless hearts are birthed in perfect love and that’s from Jesus and 1 John 4-18,” said the 24-year-old McDermott.

“That’s been my verse because I was always scared of two metres.

“I knew in my body I could do a lot higher but the fear aspect of high jump is the thing that gets to you with the mind.”

‘You can’t always take a free ride on Catriona Bisset, sometimes you have to work for it’ – @catrionabisset. She’s the next one automatically for nominated for Tokyo after taking out the 800m title, this plane is filling up fast! #ThisIsAthletics pic.twitter.com/gRIvxQ1vHj

Edwards and McDermott were among 15 Australians included on Sunday in an Australian track and field team for the Tokyo Olympics that could eventually number more than 70.

Having already bettered the qualifying standard on several occasions, reigning Commonwealth champion Kurtis Marschall was also named, despite failing to clear a height in the men’s pole vault.

Abdoulie Asim is your Men’s 200m Australian Champion! What a moment for the man who says sleeping under Parramatta Bridge gave him more peace of mind than living in Ghanda. His dream is to represent Australia! #ThisIsAthletics pic.twitter.com/PB9uDYKmfL