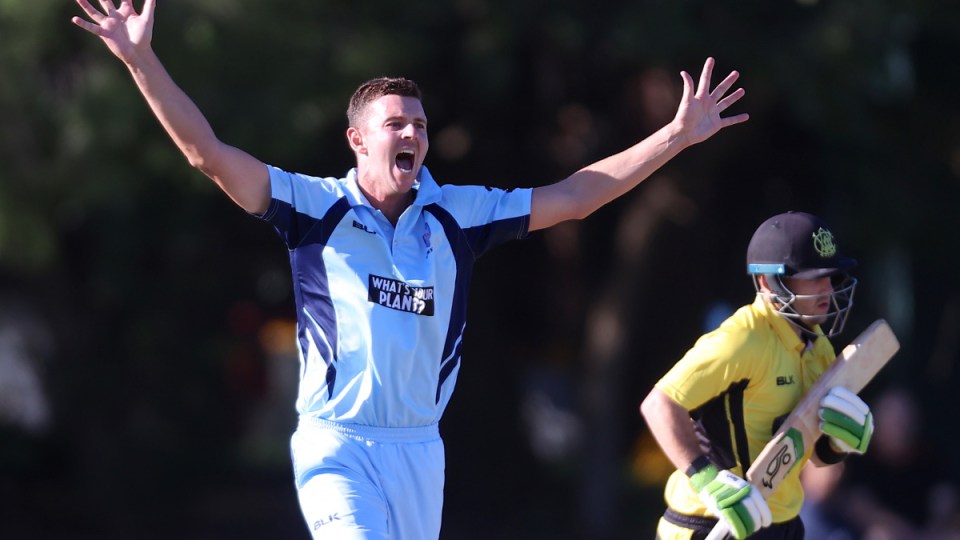 The depth of New South Wales cricket was again on display as a NSW side trimmed of many of its stars beat Western Australia by 102 runs to take out the one-day cup.

Missing the likes of star batsmen Steve Smith, David Warner and Moises Henriques to the Indian Premier League, the Blues instead leaned on 20-year-old Jack Edwards, who scored 108 in his side’s modest total of 8-251.

Sean Abbott (4-23) then did much of the damage with the ball at Bankstown Oval as the visitors were cleaned up for just 149 in 40.3 overs.

Edwards was named player of the match for his 122-ball knock (three sixes, four fours), becoming just the third man to score a one-day hundred in a final for the Blues.

He combined well with opener Daniel Hughes (58) on a tricky, two-paced deck.

The pair came together and added a vital 118 for the fourth wicket after the hosts had lost three batsmen for seven runs off 22 deliveries.

NSW tried to up the ante in the final five overs with Oliver Davies (19) and Abbott (14) chiming in with quick runs, but the wickets continued to fall with Jason Behrendorff (3-46) and Mitchell Marsh (2-34) claiming four of the last five dismissals.

The youngest man to ever score a hundred in a one-day final, 20-year-old Jack Edwards was simply superb against WA today #MarshCup pic.twitter.com/B3mAdrO02q

But it was the entry of Abbott into the attack in the ninth over that did the real damage, the burgeoning all-rounder picking up Josh Philippe (14) and Mitch Marsh (17).

Abbott and then Test tweaker Nathan Lyon (3-38) turned the screws on the Warriors middle order, with Australian all-rounder Cameron Green (36), Josh Inglis (29) and D’Arcy Short (26) all getting starts but failing to go on.

NSW captain Kurtis Patterson had high praise for his side after victory in a season that he once thought would not be possible.

“This year has presented challenges for everyone and cricket has been no different,” Patterson said.

“I think we made the right decision at the toss batting first, and Jack Edwards – what a special innings to give our bowlers something to chase.