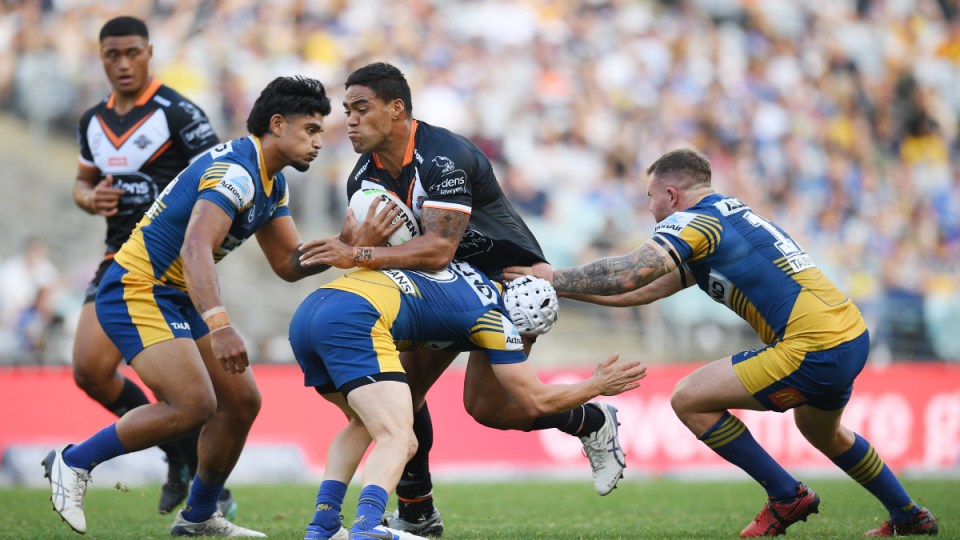 The NRL’s new rules are back under the spotlight after the most lopsided round in almost 17 years.

A combined total of 209 points have decided the eight games of round four, with an average of 26.1 points between teams at full-time.

Parramatta’s 14-point win over Wests Tigers on Monday capped off the biggest margin in a round since Round 13 in 2004 when 29.6 was the average difference between sides.

Before Monday’s game the mark was previously at 205 points for the weekend, set in round 21 of 2013.

The NRL was adamant at the start of the year that early-season blowouts couldn’t be put solely on the new rules, which promote fatigue.

And while poor roster management and self-confessed “soft” efforts from teams have contributed, there is now the potential for a problem.

Just six of 31 games played so far this season have been decided by a converted try or less, denying fans regular grandstand finishes.

“I don’t think any of us like seeing a game of footy when it’s 30-0 at halftime,” Warriors coach Nathan Brown said.

“When you see games where it’s tight, they are the games we want to see from a footy fan’s point of view.

“I don’t think it’s great for the game, but I don’t know what the answer is there.

“Because I do think the new rules make for a good spectacle. I like seeing the game where smaller people can get an advantage.”

Hutchison snags an intercept & the rest is history! 🤩#TelstraPremiership Moment of the Match. pic.twitter.com/LSs8vGHbxP

Brown’s side is one of the few teams to have had two close games, and are yet to have been blown off the park.

But the gulf in class is best demonstrated on the ladder, where a clear bottom pack has emerged.

While Manly, Canterbury and North Queensland would likely still have struggled under any rules, they all have for-and-against scores of minus-100 after the opening month.

Previously, the last team to have a minus-100 for-and-against after four rounds was the 2002 Cowboys.

“Some sides on the weekend had some scores put on them when they competed for a while and started to fatigue a bit,” Brown said.

Then the classy players on the other side take advantage.

“Under the old rules you could slow the game up. Where now the game has quickened up for good reason.

“Sometimes it takes time for the other players to adjust.”

Meanwhile three-time premiership-winning Roosters coach Trent Robinson also agreed the blowouts were a result of the rules, but didn’t have an opinion on if it was a good or bad thing.

“Of course, it’s down to the rules and unstructured nature, and people are enjoying that,” Robinson said.

“But the flipside is you’re going to get some blowout scores.

“That’s natural. Some people are going to be better at unstructured than other teams.”