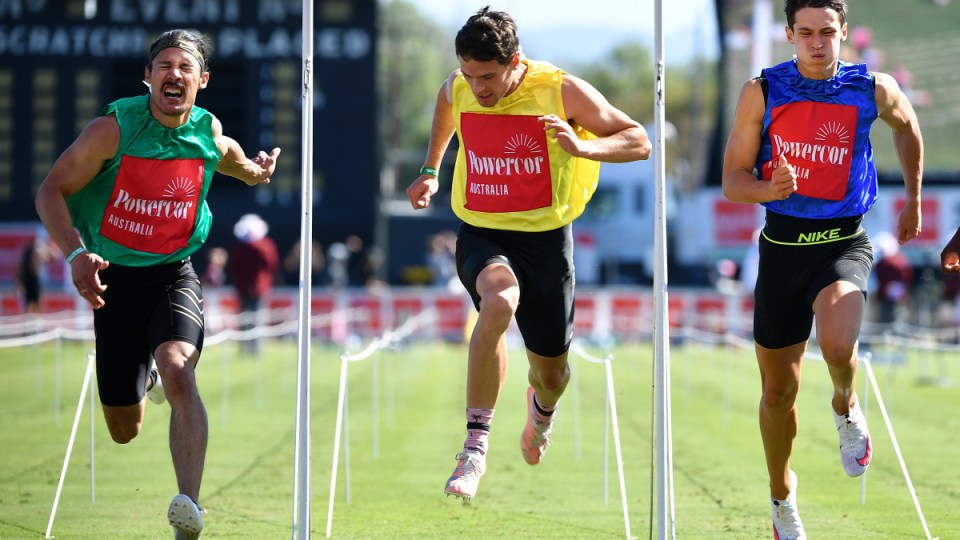 Thirteen long years after making his debut at Central Park and a decade since finishing a narrow second in the Stawell Gift, veteran sprinter Edward Ware has finally saluted in the famed 120-metre handicap event.

Racing off a mark of 9.75 metres, Ware surged to victory in 12.19 seconds on Easter Monday ahead of Sebastian Baird (8 metres) and Munashe Hove (5 metres), who was pushed back a metre after he false-started.

Ware pocketed $40,000 for his Gift triumph and then added another $950 to his winnings an hour later when he triumphed in the 200-metre Jack Donaldson Handicap, becoming the first man in more than half a century to complete the sprint double at Central Park.

“Some people said I was mad to try and run the Stawell Gift and 200 metres double, well ‘sucked in’,” an elated Ware said.

Edward Ware has won the FINAL of the Powercor Stawell Gift. He’s had an unbelievable weekend and he’s not done yet! #PowercorStawellGift #StawellGift pic.twitter.com/yIxf9Ussus

“The first time I came to Stawell in 2008 I won the Bill Howard Handicap and then I came second by about one hundredth of a second in the 2011 Gift final (to Mitch Williams),” he added.

“I made the final again in 2016 and came fourth to Isaac Dunmall.

“So it’s something about every five years, it just seems to work out that way.

“I’m 32 and I turn 33 in a month, so it’s not getting any easier and I knew there was probably only one crack left.

“I’m just so glad it happened to be this year.”

The Melbourne sprinter said he had benefited from the enforced discipline required by COVID-19 restrictions in 2020.

“I tend to go out on the town quite a bit on Friday and Saturday nights so when you can’t do that, you are kind of forced to go to bed early, get up and put on the spikes the next morning,” he said.

The women’s Gift was won by 27-year-old South Australian Hayley Orman, who has fought back to full fitness after suffering a groin injury in December.

The cheese affineur (or cheese ager) powered to the line in 13.88 seconds off a handicap of 9.75 metres.

“I’m a trained food technology teacher and was just struggling to break into the education life so I took a bit of a detour,” Orman said.

“I love food, it’s my second love to running and it just happened to fall out this way.

Running off scratch, McSweyn – the Australian record holder over 1500 metres and 3000 metres – reeled in most of the 13-strong field to cross the line in eight minutes 20.36 seconds.

McSweyn chased down nine of the 12 runners ahead of him, including fellow world-class performers Ryan Gregson, Matthew Ramsden and Brett Robinson.

The 25-year-old Tasmanian eventually crossed the line in fourth place in eight minutes 20.36 seconds, a stunning time on grass.

Tom Thorpe chats to the media after upsetting the party in the AIA Vitality Invitation 3200m. What a win off 200m. #PowercorStawellGift #Stawellgift pic.twitter.com/dSohEMiZnr

“I picked Tom (as the likely winner) pre-race,” McSweyn said.

“He had a good handicap for the form he is in, but you still have to execute a good race so credit to the boys who were out the front.

“You always think you’re a chance especially when a few guys start coming back towards you.

“You think I’m going to pick them up one by one and hopefully I can get to the final guy.

“With two laps to go I looked up and saw I still had a pretty big gap to make up so I thought I’d have to run that second-last lap as my last lap to try and get on.

“Once I couldn’t get quite to where they were, it was a pretty rough last 400 metres.”

Had McSweyn claimed the win it would have rivalled Cathy Freeman’s famed victory off scratch in the 400m at Stawell back in 1996.