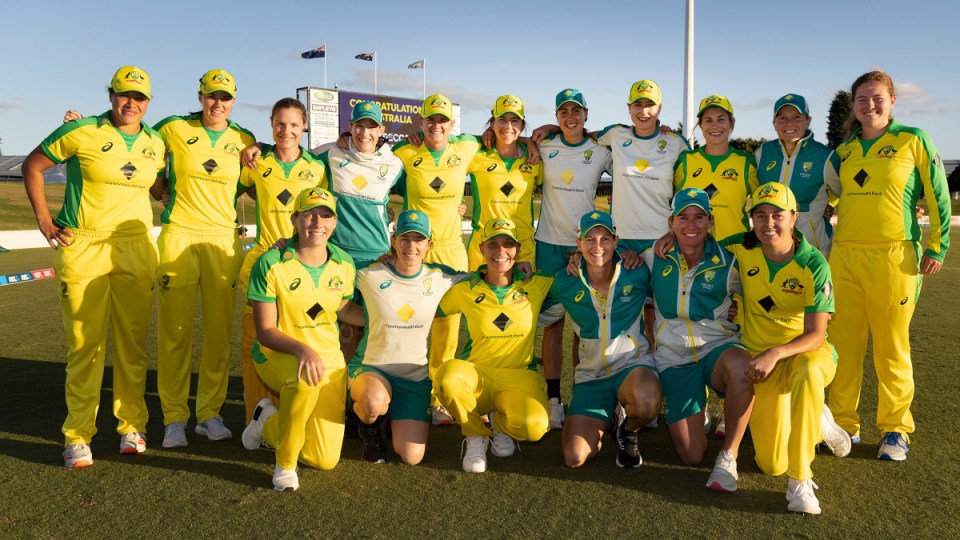 Megan Schutt and Alyssa Healy have powered Australia to a world record 22nd straight one-day international win, crushing New Zealand by six wickets and setting a new benchmark for dominance of the sport.

In Mount Maunganui on Sunday, Meg Lanning’s side eclipsed the 21-match winning streak of Ricky Ponting’s 2003 World Cup winners to become the holders of the longest winning streak in any format of international cricket.

Schutt’s 4-32 kept New Zealand to a below-par 212 from 48.5 overs at the Bay Oval before the visitors knocked off the winning score in under 39 overs to go one up in the three-match series.

Healy’s quickfire 65 off 68 ensured Australia always had the win in sight, with Ellyse Perry and Ashleigh Gardner completing the job with half-centuries of their own.

“Probably a lot of players in that (change) room and me in particular idolised Ricky Ponting growing up.

“He’s exactly how I wanted to bat and take on the game, so for us to break a record that had him all over it is pretty special for this group.”

The dominant win was a fine way for Matthew Mott’s side to secure its place in the record books.

Australia’s last ODI loss was more than three years ago, at home to England in October 2017.

Amazing contribution from a heap of people over a three-year period, but special shout-out to Alyssa Healy, Beth Mooney, Ashleigh Gardner and Rachael Haynes who played in each of the 22 straight ODI wins! 👏👏👏 pic.twitter.com/kUQBPmXeeL

Despite the shot at glory, Schutt said it wasn’t discussed by players.

“We didn’t mention it before we went out to field today … but it’s nice to have it now,” she said, beaming.

The seeds of New Zealand’s defeat were sown in the White Ferns’ slow start.

Unheralded opener Lauren Down made just one off her first 20 deliveries, with the White Ferns sluggish at 1-17 off eight overs.

Down got moving and finished with a career-best 90, combining for two half-century stands with Amy Satterthwaite (32) and Amelia Kerr (33).

The Kiwis couldn’t find a partnership after Kerr’s departure, losing 8-53.

Nicola Carey shone with 3-34, including the wickets of Down and Satterthwaite, the stand-in skipper with Sophie Devine rested.

Feeling the love from over here in New Zealand, massive thanks to all of you for the support! 💚💛 pic.twitter.com/I4V37kU6f8

The Kiwis held early hope of an upset after snaring Rachael Haynes (14) and Lanning (5) early.

But Healy’s quick runs were crucial in keeping the target within sight.

The wicketkeeper put on 78 with Ellyse Perry, who scored 56 on her return to the ODI side after 18 months away.

Gardner then arrived to blow the Kiwis out of the water, knocking 53 off 41 and putting Australia over the top with a six with just 38.3 overs gone.

The victory means Australia is in pole position to win the Rose Bowl, a trophy it has held since 1999.

The series concludes with two further matches at the Bay Oval on Thursday and Saturday.