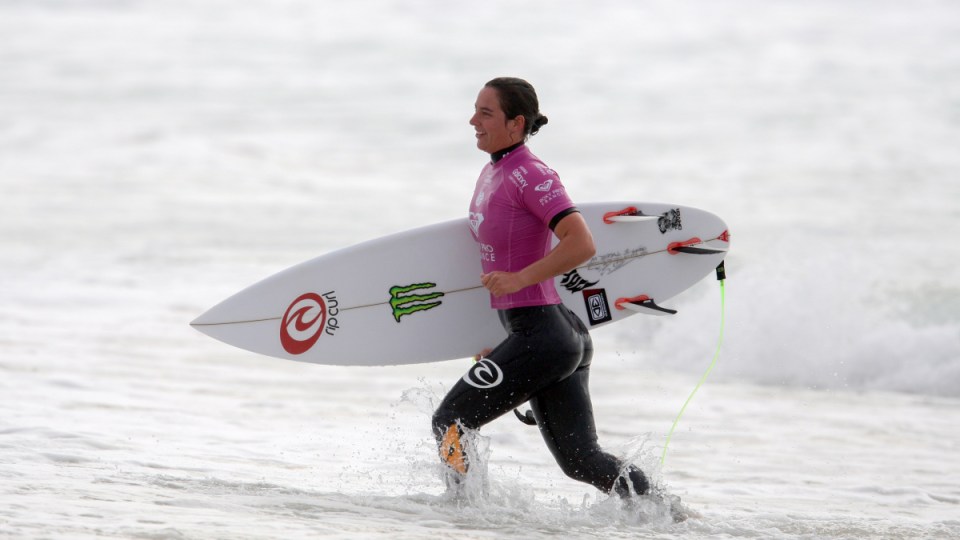 Tyler Wright, pictured in France in 2015, advanced in Newcastle on Thursday. Photo: Getty

The 27-year-old was measured and efficient in a comfortable round one heat in the Newcastle Cup as action began on Thursday, three months after the season-opener in Hawaii and nearly 30 years since the Championship Tour held a leg in the city.

Apart from a one-off appearance in Hawaii in 2019, two-time world champion Wright hadn’t featured on the Championship Tour since falling ill midway through the 2018 season.

A sudden bout of influenza and then the harrowing post-viral syndrome floored the talent, Wright suffering from “brain fog”, dizziness and unable to get out of bed, let alone contemplate surfing professionally again.

The current world number one is hitting the water. Watch @tylerGwright in the Rip Curl Newcastle Cup, https://t.co/ie0ZfNdmHw.@ripcurl @corona pic.twitter.com/7Nj6H4U5p1

Her absence meant she missed the Olympic qualification window, but Wright is now firmly back in the hunt for a third world title in the revamped WSL season, winning the opener in a history Banzai Pipeline final in December before COVID-19 derailed the season.

“I was traumatised. Physically I’d recovered but very traumatised and underweight for my usual body,” she said of her short-lived comeback.

“In the last year I’ve put on nine kilos of muscle and a little bit of pudding, which is what I like.

“It’s given me the space and time to psychologically heal from the illness itself and to develop again as an athlete.”

She backed up the Hawaii title with a confident round one win at Merewether Beach on Thursday, showing her class with a savvy move to block an opponent and then score 7.6 on her final wave to seal direct entry to the third round.

“I loved it; I really enjoy competing … first time competing back in Australia in almost three years, it’s pretty cool,” she said.

“Part of coming back is to be really efficient, really smart. I reckon I dropped the ball on one out there I should really clean up but first heat back in a couple of months (since the Maui Pro) so I’ll give myself that.”

Olympic-bound compatriots Stephanie Gilmore and Sally Fitzgibbons also excelled on Thursday to win their heats, as did emerging talent Isabella Nichols as conditions dropped off in the last heat of the day.

Macy Callaghan and Keely Andrew were third in theirs and will face elimination in the next round, with bigger swell forecast to arrive over the weekend.

Surfers endured a two-week quarantine period on arrival in Australia for the new-look tour schedule after the Sunset Cup in Florence’s home of Hawaii, Gold Coast’s Snapper Rocks and the the annual Easter Bells Beach Classic were cancelled or rescheduled due to COVID-19.

Instead, the tour moves to Narrabeen next, followed by legs in Margaret River and Rottnest Island in Western Australia.

World No.1 Tyler Wright makes most of Australian surfing return