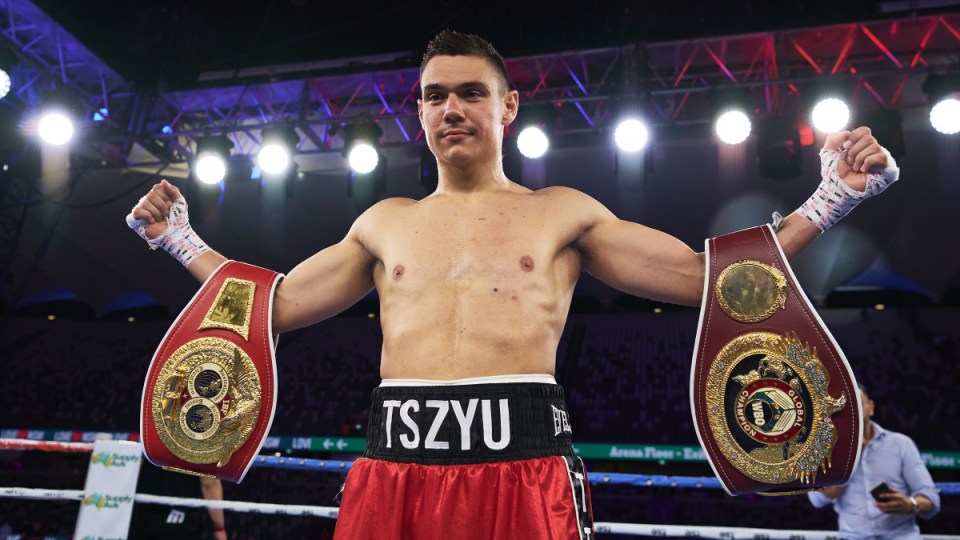 Tim Tszyu has continued his relentless pursuit of world-title glory with a brutal win over Dennis Hogan in their Steel City Showdown in Newcastle.

Hogan’s camp threw in the towel midway through the fifth round on Wednesday night after the Irishman could no longer withstand a savage assault from Tszyu.

The victory extended the 26-year-old’s undefeated record to 18 wins as he eyes a shot at the super welterweight world title.

Tszyu is the WBO’s No.1-ranked challenger and is awaiting a crack at the winner of a likely battle between American Jermell Charlo and Argentina’s Brian Castano.

Tszyu, the son of former world champion Kostya but forging his own stellar career, was overjoyed with the win and said he was only just warming up when the fight was stopped.

“It’s sink or swim. As I said, I was going to take him to the deeper rounds and let him sink,” he said.

“I told you before: it’s not tip-tap. We’re not ballerinas here. I’m here to do damage.

“When I step into the ring, this is my kingdom.”

Another one bites the dust. ⁣
⁣@Tim_Tszyu overcomes an early cut, chopping down a gutsy Dennis Hogan inside five rounds.⁣#ozboxing #boxing pic.twitter.com/5ILZGJ6wFj

The fight was in doubt right until the combatants entered the ring on Wednesday night.

In a sensation, the Irishman had refused to fight because of a sponsorship stand-off.

Hogan was adamant all week that unless he was allowed to wear his betting agency sponsor’s name on his shorts he would not enter the ring.

With the fight heavily sponsored by a rival bookmaking organisation, promoters had hoped to resolve the issue but Hogan maintained the fight would not go ahead if he could not publicly support his sponsor.

Promoters relented and allowed Hogan to wear the logo of his sponsor,  but it was the Irishman’s only win of the night.

Sporting royalty was on hand as Tszyu, the reigning superstar of Australian boxing, strode into the ring to the tune of Queen’s Another One Bites the Dust.

He lived up to his billing with another masterful display of front-foot boxing.

There were concerns early, though, with blood streaming from Tszyu after a head clash in the second round.

But he kept coming, hurting Hogan with a mighty left uppercut in round three.

Tszyu had Hogan reeling again with another brutal series of left-arm blows in round four.

It was no surprise when another pair of heavy left-handers rocked Hogan in the following round, forcing the decision of the Irishman’s camp.