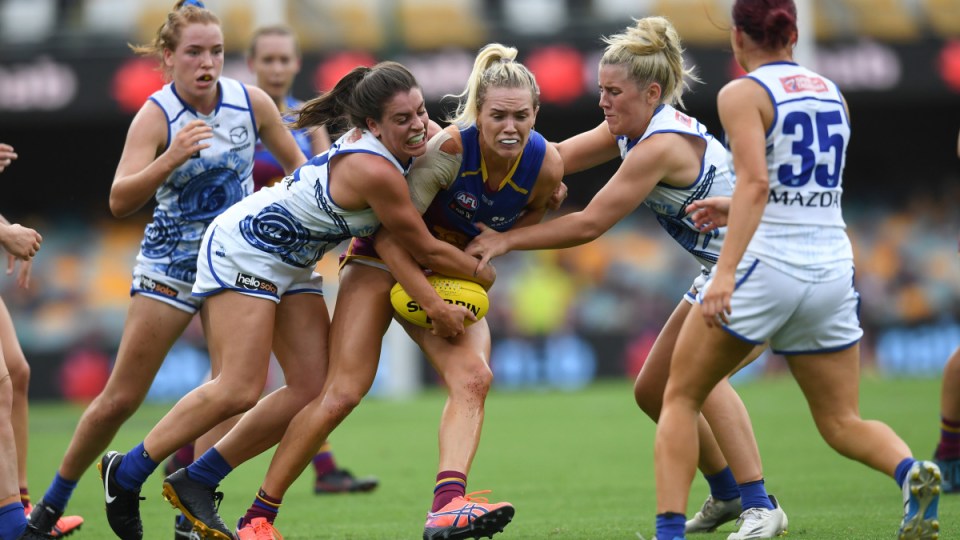 Brisbane’s Orla O'Dwyer is smothered by North Melbourne players at the Gabba on Saturday. Photo: AAP

The AFLW finals will start with a pair of knockout games in Melbourne on Saturday.

Melbourne’s clash with Fremantle at Casey Fields will start at 1.05pm AEDT, while Collingwood’s match against North Melbourne will begin at Victoria Park at 3.10pm AEDT.

The league is yet to reveal details for the preliminary finals as it continues to closely follow developments in Brisbane’s COVID-19 outbreak.

Darcy Vescio wrapped up the goalkicking race with two goals against the Giants to take her to 1️⃣6️⃣, the most in a single #AFLW Season 🌟

“We remain committed to completing the 2021 … AFLW season and awarding a premier,” AFL chief executive Gillon McLachlan said in a statement.

“While the ongoing pandemic continues to impact us all, the health and welfare of our players and the wider community remains the priority.

“We will deliver the finals series in a safe manner anchored in the advice of respective governments, public health officials and medical experts.

“The 2021 AFL women’s competition has been the best season yet and this finals series shapes up to be an extremely competitive one, where any of the top six teams can win.”

The 2020 AFLW season was halted mid-finals because of the coronavirus pandemic, with no premiership cup awarded.

Week one of AFLW knockout finals locked in for Melbourne