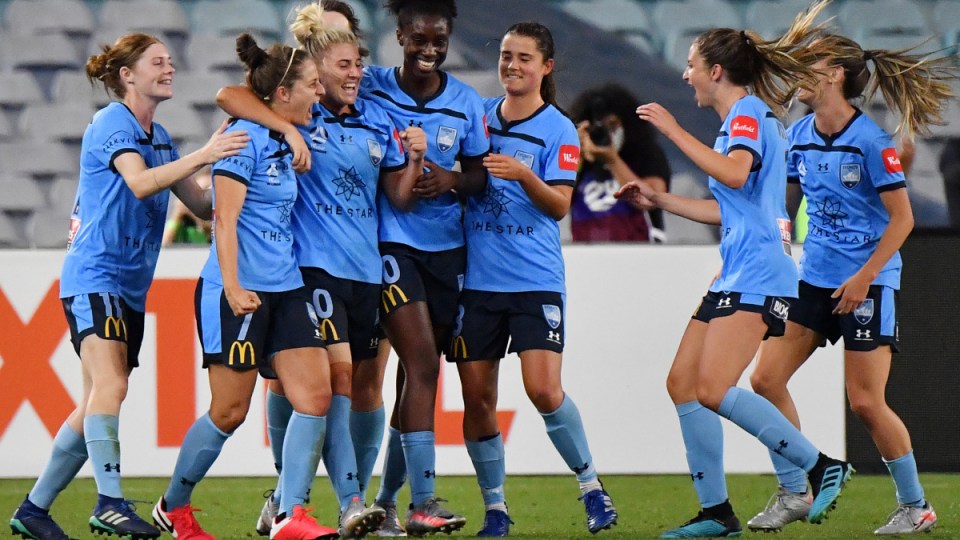 It’s not quite winner takes all, but plenty hinges on the deferred Sydney FC-Melbourne Victory W-League clash to be played on Wednesday night.

While finals teams have been decided, with Brisbane, Sydney, Victory and Canberra filling the four spots – there’s still some shuffling to be done among the top three.

A win or draw for Sydney FC (25 points) on Wednesday will see it declared minor premiers while the hot Victory (23) can move to No.1 with a win.

The only certainty is that current table-toppers Brisbane Roar (25) won’t be in top spot after that match.

.@kaitlyn_torpey with the quick strike!

The Queenslanders finished the regular season in style with a 3-0 win on Sunday over Newcastle, thanks to Kaitlyn Torpey, Emily Gielnik and Mariel Hecher goals. But they can only finish second.

A loss for Sydney will see it slip to third on goal difference, forgoing a home final in the process, while Victory is in the same position with defeat or a draw.

All this, of course, assumes there are no COVID-19 impacts on hosting rights.

It could have been so much simpler for Sydney had it beaten Canberra (22) on Friday to move to 27 points where the premiership would have been a lock.

The 0-0 result meant Canberra knocked the desperately unlucky Adelaide (22) out of finals contention on goals difference and took fourth.

Nothing stopping Catherine Zimmerman from finishing off this deflection! 🤩

That stalemate pushed the focus to Wednesday night at Sydney’s Cromer Park where the Sky Blues will face a rampant Victory.

The Melbourne side is the form team of the competition with four wins and a draw from its past five matches, punctuated by a 6-0 demolition of Perth Glory on Sunday.

Although that came as little surprise given last-placed Glory managed just a solitary draw for the entire season, it was still a highly disciplined showing from Victory with Melina Ayres and Kyra Cooney-Cross both scoring doubles.

On Thursday, defending premiers and champions Melbourne City wrapped up a disappointing season with a 2-1 win over Glory.

It will finish the competition in seventh place.