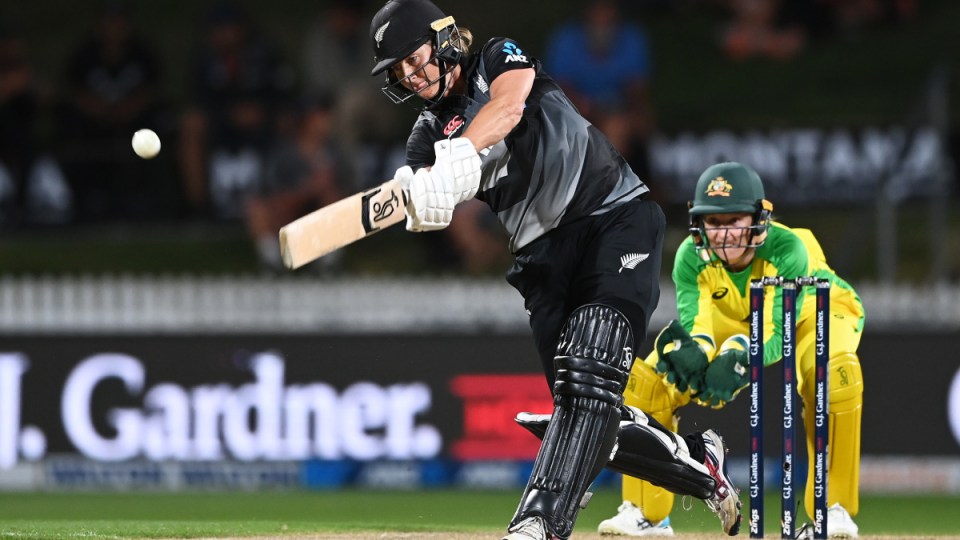 New Zealand's Sophie Devine gets a ball away in the first T20 international against Australia at Hamilton on Sunday. Photo: AAP

A defiant half-century by Ash Gardner has steered Australia to a six-wicket victory in their opening women’s Twenty20 cricket international against New Zealand at Hamilton.

Chasing 131 for victory, the all-conquering world champion Australians looked like mere mortals when they suffered a nightmare start to their run chase to be reeling at 2-3 and later 3-14 at Seddon Park on Sunday night.

Gardner rode her luck in the three-game series opener after being dropped on 30, sharing an unbeaten 71-run fifth wicket stand with the returning Ellyse Perry (23 not out off 16 balls).

A very well-deserved Player of the Match for Ashleigh Gardner, who came to the crease at 3-14 #NZvAUS

Gardner showed no sign of rust after Australia came out of a two-week quarantine on Saturday, thrashing six fours and three sixes in her 48-ball knock, which marked her fourth T20 half-century.

Australia is now on track to claim its first T20 series in New Zealand.

There were encouraging signs for Perry in her international return after a year sidelined with a hamstring injury.

She stroked three fours in her classy knock after surprisingly not being thrown the ball during New Zealand’s knock of 6-130.

World No.4 New Zealand has now claimed just one win in 18 trans-Tasman games across all formats.

But Australia didn’t have it all its own way.

It was 2-3 after Alyssa Healy (two) fell on the last ball of the first over before world No.2 batter Beth Mooney was caught behind for a golden duck off the opening delivery of the second over.

And alarm bells were ringing when Jess Kerr (2-17) reduced the shellshocked visitors to 3-14 after veteran left-hander Rachael Haynes (three) gifted a catch to mid-on.

Australian captain Meg Lanning enjoyed some luck to help settle the innings with a 48-run, fourth-wicket stand with Gardner.

Maddy Green dropped Lanning on 24, but snapped her up at long on for 28, reducing the visitors to 4-62.

No Ellyse Perry with the ball in Hamilton. Before today, she had bowled in 116 out of 120 T20Is since her debut, and had bowled in every T20I for Aus since 2015 v Ireland. The other three times she didn't bowl (all v Pak in 2014) she had a knee injury #NZvAUS

At one stage she took two wickets in four balls.

Kiwi Amy Satterthwaite enjoyed a life on 16 but fell for 40 off 31 balls with five fours and a six, sharing a 58-run third wicket stand with Amelia Kerr (20 off 29 balls).

Aussie quick Tayla Vlaeminck had plenty of speed but little luck, with Healy dropping Satterthwaite’s chance off her bowling.

She took 0-26 off her four overs in her first game for Australia since breaking down with a foot stress fracture more than a year ago.