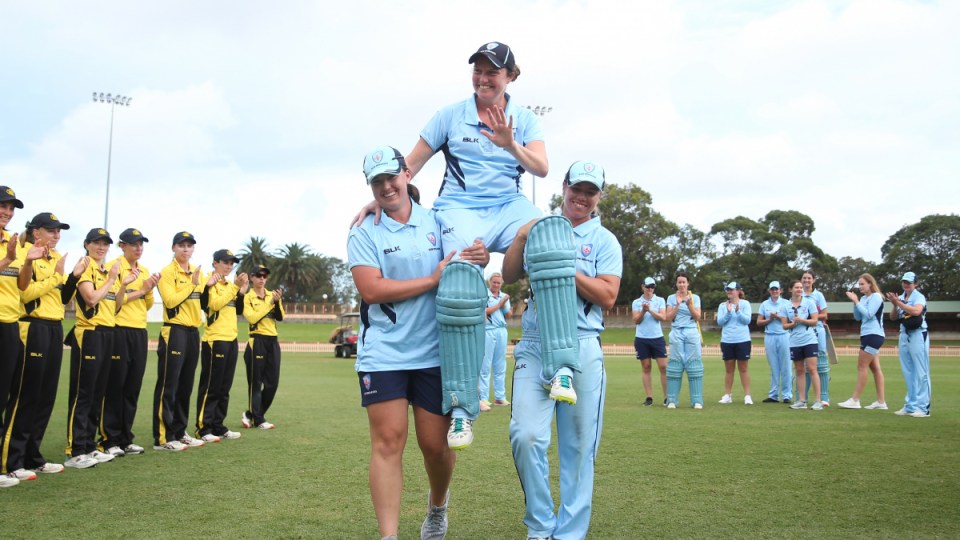 Rene Farrell is carried from the field by her NSW Breakers teammates after the WNCL final at North Sydney Oval in February 2020. Photo: AAP

New South Wales’ dominance of women’s cricket is over after Sydney’s big wet set up a WNCL decider between Victoria and Queensland, ending the greatest grand final streak in Australian sport.

The Breakers’ final-round 50-over clash with Queensland was washed out without a ball being bowled on Sunday, ensuring NSW would not make the final.

It was enough for Queensland to progress to face off against the first-placed Victoria, but only after nervously watching South Australia lose to ACT.

With a win enough for South Australia to go past Queensland into second, the Scorpions looked well placed when they hit 261, before ACT chased it down with five balls and three wickets to spare.

THE #QLDFIRE ARE IN THE #WNCL FINAL!

The results make for the first time since the tournament’s inception in 1996-97 the Breakers have not qualified for the final, ending a 24-year run in which NSW won 20 titles.

The streak was the greatest such run in any top-tier semi-professional or professional sporting league in Australia.

While rain washed away NSW’s hopes on Sunday at North Sydney Oval, it only had itself to blame after a sluggish start to the tournament.

With their Australian players on deck, the Breakers lost their first two games to a star-studded Victoria side that included Meg Lanning and Ellyse Perry.

They only managed a tie against the up-and-coming Tasmanians, before an eight-wicket loss to Queensland on Friday ultimately proved costly.

Queensland is missing Jess Jonassen and Beth Mooney through international duties, while Delissa Kimmince remains on a break away from the game..

The final was originally meant to be played with Australian representatives available, before COVID-19 forced changes to the tour dates in New Zealand.

Queensland has never won the competition, while Victoria has lifted the trophy twice.