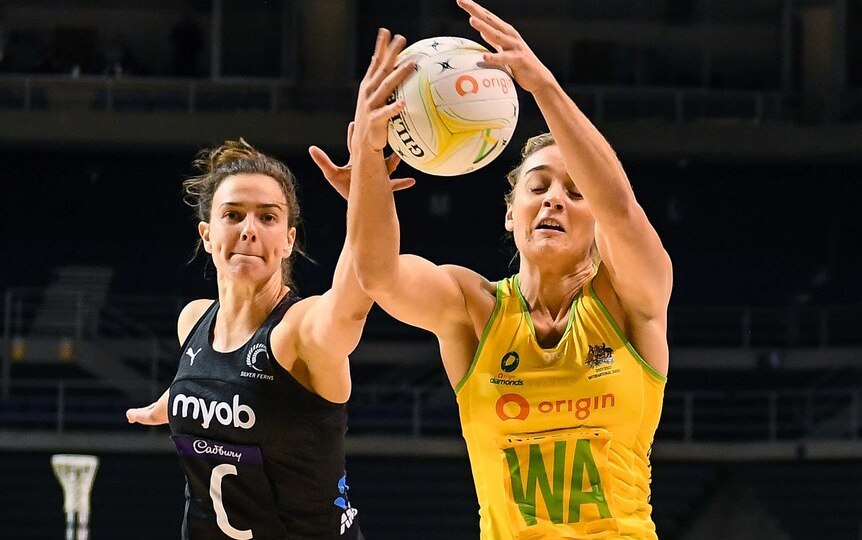 Australia has bounced back to beat New Zealand 45-36 in the second Constellation Cup Test in Christchurch, giving Stacey Marinkovich her first win as Diamonds coach.

The Silver Ferns won Tuesday night’s Constellation Cup opener 49-44, but they found themselves on the back foot early against a determined Diamonds outfit.

The Diamonds dominated on the scoreboard, leading 15-6 at quarter-time and 30-16 at the end of the second term.

They shot at 83 per cent accuracy in the opening half, having capitalised on enjoying the lion share’s of possession.

All smiles from captain Liz Watson. 🤩

The Silver Ferns burst out of the blocks in the third quarter when they claimed the opening six goals of the term.

The scoring spree helped the world champions cut back the Diamonds’ lead to 10 goals by three-quarter-time, 38-28, but the visitors went on to ice the win after the break.

The third Test will be played in Christchurch on Saturday.

The Silver Ferns will be hoping captain Ameliaranne Ekenasio’s calf injury recovers before Saturday because she was dearly missed from the home side’s shooting circle.

In contrast, Diamonds pair Cara Koenen (29 goals at 85 per cent accuracy) and Kiera Austin (13 goals at 54 per cent) were far more confident as they laid the base for a combination that promised to endure.

Nothing like a home alone to finish the game 🏡#FeelTheRivalry pic.twitter.com/bZkUwaTjnP

The Diamonds addressed the poor ball retention and discipline that blighted their opening performance by giving away an improved 19 turnovers and conceding just 49 penalties to the Silver Ferns’ 58.

At the heart of it all was Watson, whose 33 feeds and 21 assists provided the direction the Diamonds needed.

The Silver Ferns never quite clicked and struggled despite the efforts of shooter Maia Wilson (32 goals from 38 attempts).

Marinkovich gave most of the starters who were steamrolled by the Silver Ferns in the first Test a second chance.

The exceptions were Koenen, who replaced veteran shooter Caitlin Bassett, and midcourter Jamie-Lee Price, who was preferred in the matchday side over Gabi Simpson.

Watson led a centre court riposte after being upstaged by the Silver Ferns the previous night.

She had more feeds than Gina Crampton and Claire Kersten combined at quarter-time and by the halfway point of the second term all three Silver Ferns starting midcourters had been replaced.