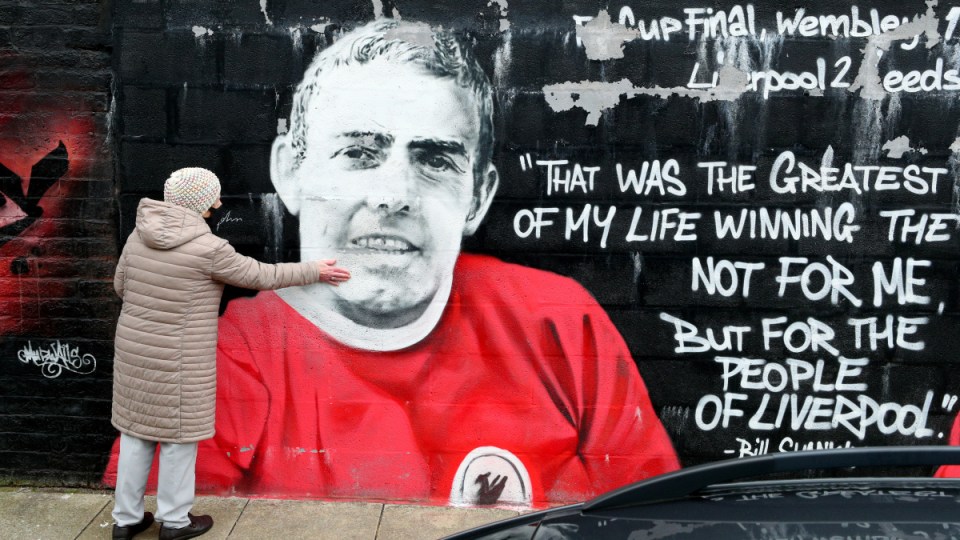 A woman touches the Murwalls mural of Ian Saint John, who has died at the age of 82. Photo: PA

He may have been just 1.7 metres tall, but what Ian St John lacked in size he made up for in stature.

The feisty Scot, who has died at the age of 82, was one of the key components of Bill Shankly’s Liverpool revolution and will be forever remembered for his winning goal that brought the Reds their first FA Cup in 1965.

It may have been a significant contribution to the club’s history but it was far from the only one he was to make during 425 appearances for the Reds in which he scored 118 goals.

RIP Ian St John 💔another Liverpool Legend sadly passes away. One of the players along with Bill Shankly who made this club what it is today. I’ll remember him most on the best football show on tv, The Saint & Greavsie. X pic.twitter.com/E1VSJsUoZs

The expense was questioned by the board, to which Shankly reportedly replied: “We can’t afford not to buy him.”

Not that Shankly’s faith needed justifying, but St John scored a hat-trick on his debut in the 4-3 Liverpool Senior Cup defeat against Everton at Goodison Park.

It was just a taster of the quality he would bring to the side, with the other element to his game, the combative nature, manifesting itself soon after when he was sent off during an end-of-season tour to Czechoslovakia.

But St John was more about passion than malice: “I had a quick temper, which was a bad thing. The fact I wasn’t frightened of anybody was a good thing.” And that instantly won him an army of followers.

We are deeply saddened by the passing of a true Anfield legend, Ian St John.

The thoughts of everyone at Liverpool Football Club are with Ian's family and friends at this sad and difficult time.

His partnership with Roger Hunt saw Liverpool gain promotion to the top flight a year after his arrival.

He scored 18, 19 and 21 goals in his first three seasons – the latter the highest single-season contribution of his Reds career, as the club won the First Division championship for the first time in 17 years.

That one feat of athleticism enshrined the name of St John in Liverpool’s history books and, although he went on to win another league title and subsequently played for Coventry and Tranmere and managed Motherwell and Portsmouth, as well as winning 21 Scotland caps, it was after his football career ended that he became even more famous to a new generation.

His Saturday lunchtime show, The Saint and Greavsie, alongside Jimmy Greaves, was beamed into millions of British households from 1985 and enjoyed a seven-year run as television’s premier football preview show at a time when such a thing was unheard of.

Its mix of football chat and humour was the blueprint for shows such as Soccer AM and Frank Skinner and David Baddiel’s Fantasy Football League.

It was only a diagnosis of bladder cancer in 2014, which subsequently spread to his prostate, which curtailed his appearances.