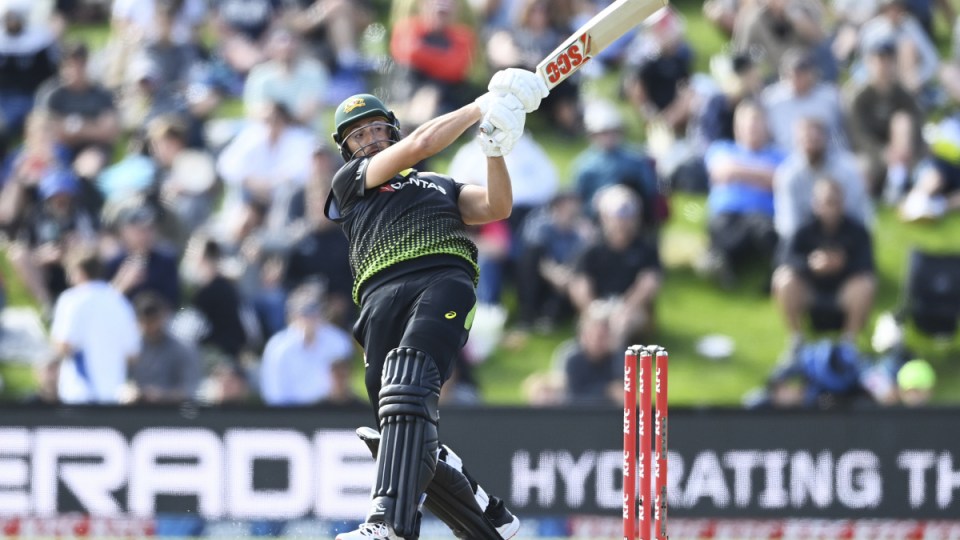 Australia has fallen agonisingly short in another big run chase in New Zealand, finishing four runs short to slip 2-0 behind in their T20 series with the Black Caps.

Unlike Monday’s 53-run capitulation in Christchurch, there was no debacle in Dunedin as Marcus Stoinis and Daniel Sams steered Australia to within touching distance of New Zealand’s 6-219.

When Mitchell Santner took 3-6 in the 13th over – dismissing Josh Philippe and then Ashton Agar and Mitch Marsh for golden ducks – Australia looked dead and buried.

Stoinis and Sams revived the tourists, combining for a stunning 92-run seventh-wicket partnership.

The pair needed 15 from the last over, only to both hole out as Australia finished with 8-215.

Stoinis was lethal, reaching his first international half century off 22 balls before finishing with 78 off 37.

Sams was even more explosive, scoring 41 off 15 before missing out on a full toss in Jimmy Neesham’s final over.

Stoinis followed shortly after, caught at long on off the second-last ball of the innings, needing nine to win.

“It seems like we’ve done it quite a few times,” Stoinis said.

“I was just saying to Mitchy Marsh, I said ‘Don’t worry our time will come and we’ll hopefully be on the other end of these in the future’.”

Dunedin’s picturesque “leafy fortress”, nestled among the trees of the University of Otago’s sporting fields, always promised runs given its short boundaries.

Martin Guptill began the entertaining afternoon with a boundary off the first ball, and finished with a mighty 97 off 50.

The veteran smashed eight sixes and six fours before falling just short of a century when he was caught on the boundary.

Guptill was ably assisted by captain Kane Williamson’s 53 off 35, in a NZ record 131-run second-wicket stand.

New Zealand threatened a total rewrite of the T20 record books when Neesham arrived and hit three consecutive sixes to start his innings.

The all-rounder, who finished with 45 off 16, was handed the ball for the final over and held firm despite a number of wayward deliveries.

“It was a great game,” Guptill said.

“You can never be safe on a small ground like this and a good wicket and big strong guys hitting the ball. It doesn’t take much to take a cricket game away … our guys held their nerve.”

Philippe shook off a first-up failure in Christchurch to post a fine 45 off 32 in just his second T20 match for Australia.

But the jungle drums are likely to continue beating around out-of-touch skipper Aaron Finch.

The series resumes in Wellington on March 3, when Santner (4-31) will have the chance to complete his hat-trick.

Australia will need to win that match, as well as matches at Auckland’s Eden Park and Tauranga’s Bay Oval if it is to claim the series.