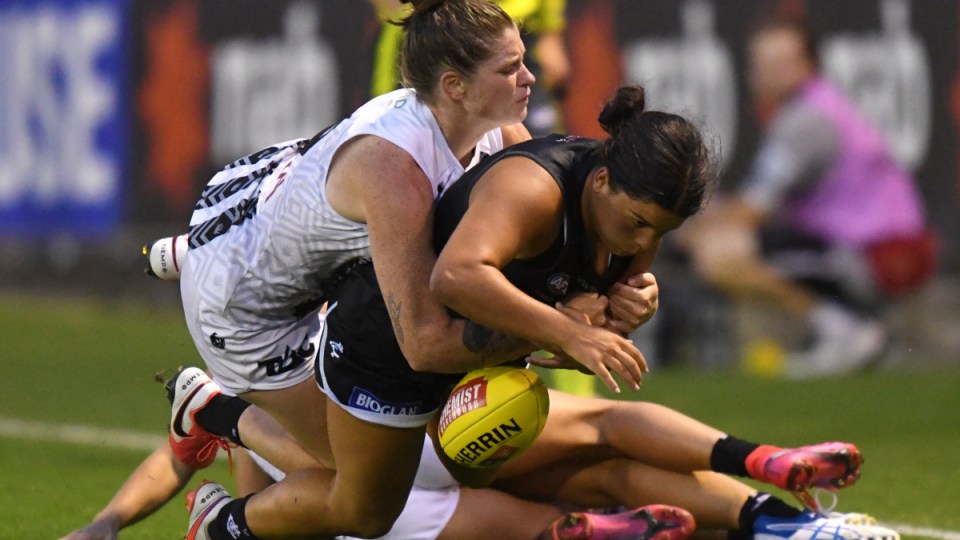 Collingwood has stunned arch-rivals and premiership fancies Carlton by six points in the opening match of the AFLW season.

The Magpies held off the Blues at Ikon Park for the second year in a row, producing a scintillating four-goal run in the second quarter to set up the 5.3 (33) to 4.3 (27) victory on Thursday night.

A shell-shocked Carlton fought back from a scoreless opening half with three third-quarter goals.

But the damage had already been done and the comeback ultimately proved in vain as a capacity crowd of 6712 watched on in the first ticketed match in the competition’s history.

The Magpies have shocked the Blues in the opening game of the NAB #AFLW 2021 season.

Blues captain Kerryn Harrington kicked a goal after the full-time siren to sum up the home team’s second-half dominance.

Led by the electric Chloe Molloy, Collingwood was all over the Blues, who failed to score until seven minutes into the third quarter.

The Magpies dominated general play in the first quarter but only had one behind to show for it.

But once Aishling Sheridan kicked the first goal, the floodgates opened.

Molloy slotted two majors in as many minutes, with the first being booted out of the stadium and onto the Princes Park walking track.

But the real dagger came just before half-time when former Blues captain Brianna Davey kicked an exciting running goal in her first game as Magpies co-captain.

Collingwood defender Stacey Livingstone again had the better of her duel with All-Australian forward Tayla Harris.

Their match-up was eagerly anticipated after Livingstone last year labelled the Blues spearhead “useless” in an explosive post-game interview.

Carlton has plenty of soul searching to do after being anointed as equal premiership favourites with Fremantle this week.

On the other hand, the Magpies’ performance will give them confidence of backing up a promising 2020 season, in which they just missed out on finals for the first time.