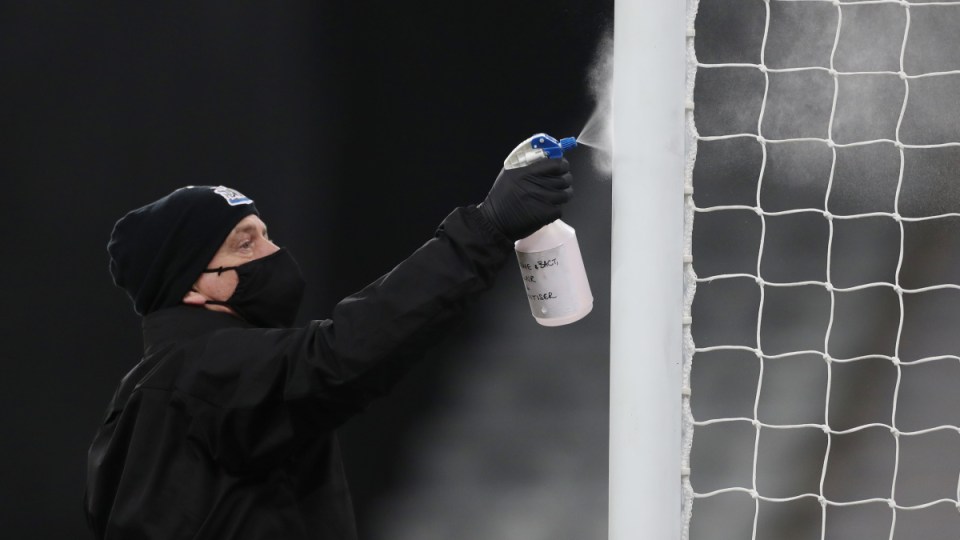 Far removed from the strict Premier League processes, a Zambian coach has been suspended for urinating on a goalpost. Photo: Reuters

The goalkeeper coach of Super League side Forest Rangers has been sanctioned for urinating on a goalpost before a match in Zambia.

Charles Chileshe was accused of unsporting conduct after “sprinkling an unknown substance in goal and urinating or simulation of urinating against one of the goalposts” ahead of Saturday’s game at Prison Leopards, a Football Association of Zambia statement said.

Chileshe was further accused of acting “in a manner that is not consistent with the values and integrity of football as espoused by FIFA, CAF and FAZ”.

Rangers said in a statement they had taken unspecified disciplinary action against Chileshe.

A video has been shared of the moment suspended Forest Rangers FC goalkeeping coach Charles Chileshe was seen sprinkling an unknown substance and simulating to urinated or actually urinating against a goalpost before his team's match with Prison Leopards on Saturday. pic.twitter.com/VapGc1fEUx

The use of ‘muti’ – the African belief that certain ritual actions can help with success on the pitch – is not uncommon on the African continent.

But whatever Chileshe was trying to achieve did not work this time as his side was beaten 2-0 by Leopards.

The incident follows accusations of “witchcraft” from Zimbabwe coach Zdravko Logarusic at the African Nations Championship in Cameroon after a dead bat was found on the halfway line prior to kick-off of Saturday’s tournament opener against the hosts.

Own goal as Zambian coach suspended for urinating on goalpost