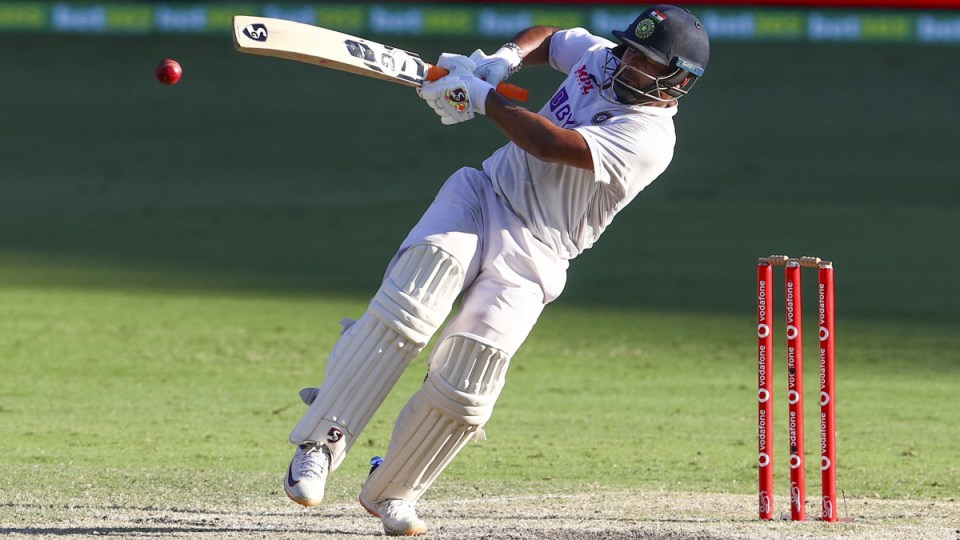 India's Rishabh Pant falls as he hits a boundary late on the final day of the fourth Test at the Gabba on Tuesday. Photo: AAP

An injury-ravaged India has ended Australia’s 32-year undefeated run at the Gabba with a record-breaking final day chase to win the Test by three wickets and the series 2-1.

Rishabh Pant (89 not out) was the hero after Cheteshwar Pujara (56) and Shubman Gill (91) had set up the pursuit.

The visitors bravely chased down 328 with three wickets and just 19 balls remaining on Tuesday despite only needing a draw to retain the Border-Gavaskar Trophy.

It capped an incredible comeback by a depleted Indian squad, which was dismissed for just 36 to lose the opening Test in Adelaide in mid-December and was missing as many as 11 players through injury and unavailability in Brisbane.

After tea, in the final session, India required a further 139 runs to complete what would be a record-breaking chase at the venue.

Australian captain Tim Paine, who lamented his team’s inability to close out a series win at multiple junctures, borrowed a quote from AFL coach Alastair Clarkson while assessing the wreckage.

“In this series, we had both of those.

Tim Paine reflects on being outplayed by a disciplined and tough side.

“We walked away from Adelaide with everyone saying we’re awesome but we were pretty ordinary for most of that Test, except an hour.

“We have to keep perspective on it. We’ve been outplayed, we had our chances to win this series and this Test … we’re absolutely disappointed.

“My message to our players is we have another opportunity in a month or so and international cricket is absolutely tough.”

A remarkable, match-winning knock from Rishabh Pant sees him named Player of the Match at the Gabba #AUSvIND pic.twitter.com/BstOqekdOV

The once-in-a-generation defeat could have long-term ramifications.

As a minimum it has clouded the path of Australia, who had topped the Test table, to this year’s world championship final at Lord’s.

There will be questions asked about Paine’s captaincy and wicketkeeping after he missed a potential stumping when Pant was on 16, and of potential changes for the upcoming tour of South Africa.

It was a fatiguing and frustrating Tuesday for Australia’s attack.

A win for the ages for so many reasons. Incredible #AUSvIND pic.twitter.com/KRg6X2gRoC

There should also be praise for an inexperienced Indian XI that refused to buckle when severely under the pump on countless occasions in recent weeks.

Man-of-the-match Pant described the victory as one of the biggest moments of his life, while stand-in skipper Ajinkya Rahane struggled to put the enormity of his side’s achievement in words.

Steve Smith reflects on the final day at the Gabba and THAT knock from Rishabh Pant… #AUSvIND | @alintaenergy pic.twitter.com/XnKL7wnO9a