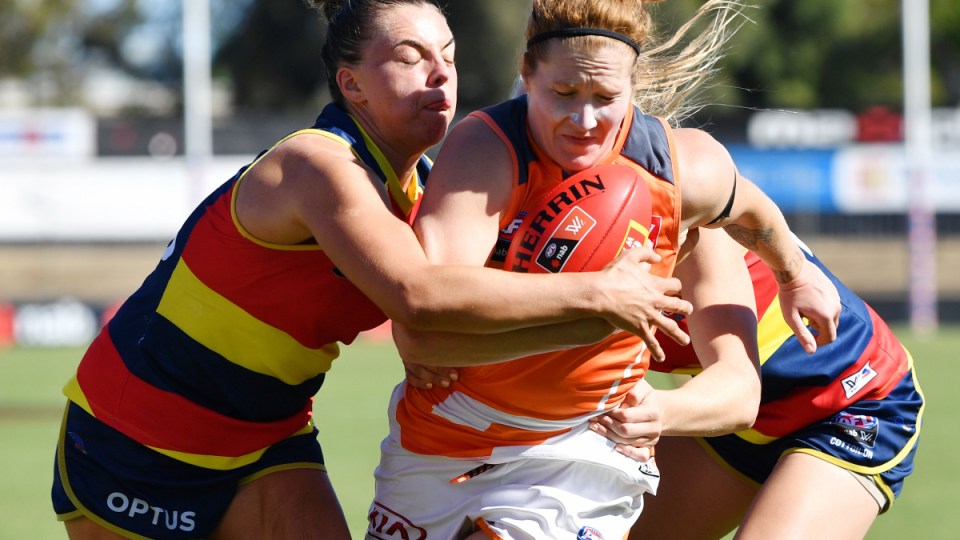 Gun Adelaide midfielder Ebony Marinoff will miss a third of the AFLW regular season after receiving a three-match suspension for the front-on contact that left Greater Western Sydney’s Brid Stack with a fractured neck.

Stack was rushed to hospital after the contact made by Marinoff in a contest during the fourth quarter of an AFLW practice match at Adelaide’s Norwood Oval on Sunday.

Marinoff, 23, pleaded not guilty to forceful front-on contact at Tuesday night’s tribunal but the charge was upheld, with the Crow receiving the longest suspension in AFLW history.

No player had previously been suspended for more than two games.

JUST IN | Ebony Marinoff has been found guilty of forceful front-on contact late in the Crows' practice match on Sunday: https://t.co/8sNwXckpXB pic.twitter.com/ICtmVMTeAR

Adelaide has until noon on Wednesday to decide whether to appeal the decision.

“The club is really disappointed with this outcome and we’ll be considering our options going forward,” Crows head of women’s football Phil Harper said.

The incident had been assessed as careless conduct, severe impact and high contact, and Marinoff was unable to make an early guilty plea given the matter was referred directly to the tribunal.

Ebony Marinoff has been found guilty of engaging in forceful front-on contact at the AFL Tribunal tonight and has been suspended for three matches. Below is the incident in question, more to come #weflyasone #crowsaflw pic.twitter.com/3FDLg1kXmQ

The tough-tackling midfielder had never previously been charged by the match review officer in her four previous AFLW seasons.

“I’m really disappointed with this outcome, it was never my intention to hurt Brid,” Marinoff said.

“Every time I go onto the footy field I want to play hard but fair football and I believe that’s what I did on Sunday.

“I reached out to Brid to send her my best and I wish her a fast recovery.”

As things stand, Adelaide will be without Marinoff – a two-time premiership player, two-time All-Australian and former Rising Star winner – for its season opener away to Melbourne, then home games against Gold Coast and the Western Bulldogs.

The AFLW fixture could yet change amid border restrictions.

Stack, 34, suffered a stable fracture of the C7 vertebra in the incident but no injury to the surrounding nerves and is expected to make a full recovery.

She did not require surgery and was discharged from hospital on Sunday night but will wear a neck brace in the short term.

The game – Irishwoman Stack’s first AFLW match – was called off after the injury.