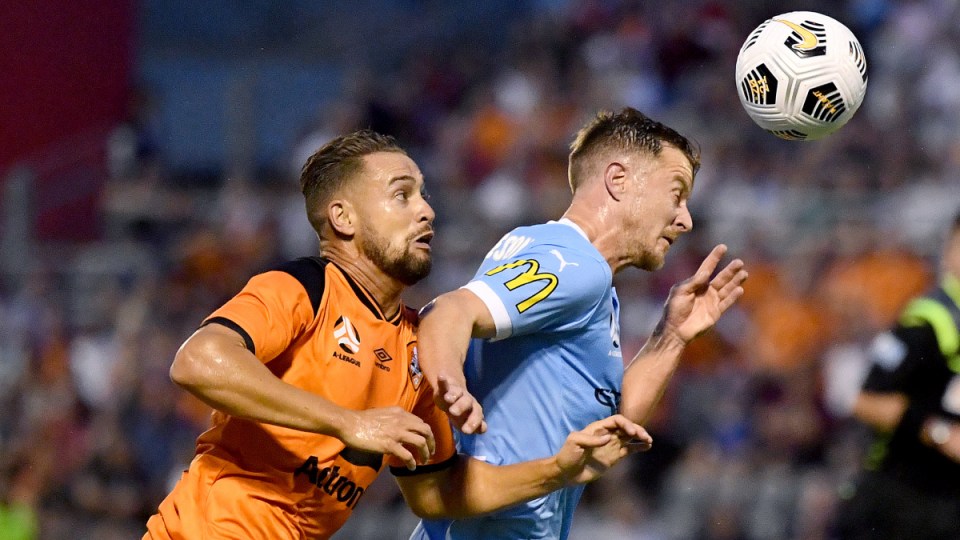 With three Melbourne-based clubs, an A League hub could be on the way. Photo: AAP

Melbourne City’s season-opening A-League win over Brisbane Roar has been soured by the sight of Andrew Nabbout limping off injured.

The Socceroos winger, making his debut for City after an off-season switch from crosstown rivals Melbourne Victory via Perth, pulled up clutching his left hamstring midway through the second half of the 1-0 win at Redcliffe’s Dolphin Stadium.

Midfielder Connor Metcalfe scored the winner for coach Patrick Kisnorbo in his first match in charge of City just minutes before Nabbout’s injury.

City also had to play the final 20 minutes of the game with 10 men after Uruguayan Adrian Luna was shown a second yellow card by referee Adam Kersey.

Last year’s grand finalists were lucky to go in at the break with the scores at 0-0, with a new-look Roar under head coach Warren Moon pressuring their more experienced rivals in humid conditions.

Japanese youngster Riku Danzaki was particularly busy in the middle of the park, as was fellow club debutant Joey Champness – playing his first A-League match since April 2019 after an attempt to forge a rap music career in the United States.

Danzaki created the best chance of the opening half, freeing up Dylan Wenzel-Halls. But the Roar forward’s effort was turned around the post by City goalkeeper Tom Glover’s foot.

Adrián Luna sent from the field as @MelbourneCity are forced to hold on with a man down.

Can @brisbaneroar make the advantage count?

Brisbane was made to pay for its lack of a cutting edge when Metcalfe worked a one-two with Socceroo Jamie Maclaren before firing a right-foot shot past Roar keeper Jamie Young in the 52nd minute.

Roar poured forward in search of an equaliser, with Champness and defender Macaulay Gillesphey coming close.

The best chance fell to Scott McDonald in second-half injury time, but the ex-Socceroos striker dragged his shot wide as Roar made a losing start to its campaign.

Brisbane’s next match is away to Victory on January 2, with City heading to Adelaide the following day.