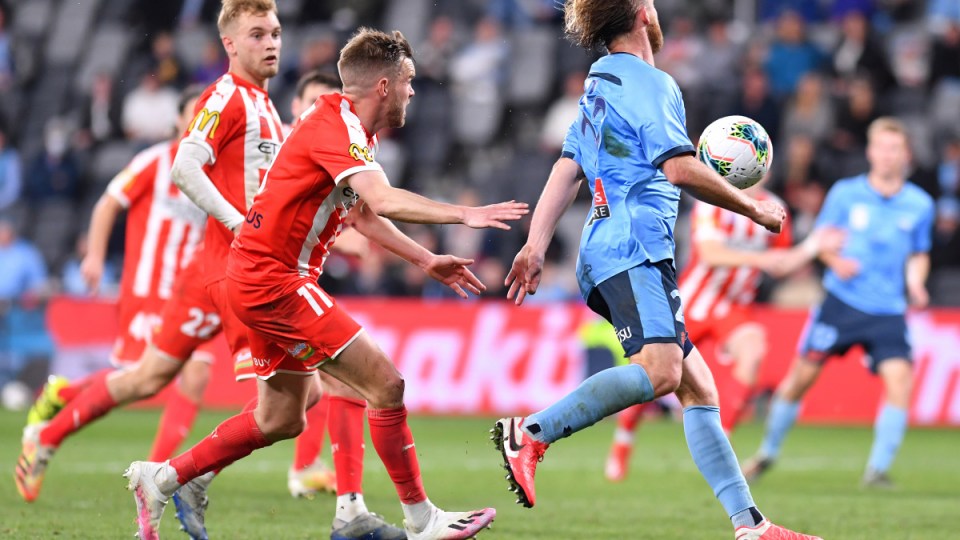 A-League and W-League action could be interrupted due to coronavirus concerns. Photo: AAP

Sydney’s coronavirus outbreak has thrown the start of the A-League and W-League seasons into disarray, with multiple games in serious doubt amid border closures.

The A-League and W-League seasons are due to kick-off on December 27 but now up to 13 games – nine A-League and four W-League fixtures across the first two-and-a-half weeks of the two competitions – are set to be postponed.

On Sunday, the NSW capital’s COVID-19 cluster jumped to 70 cases, prompting Victoria and Queensland to shut their borders.

From midnight on Sunday, most people travelling from Greater Sydney and the Central Coast will not be able to enter Victoria.

If they do, they will have to complete 14 days of hotel quarantine.

Meanwhile, people from Sydney, the Blue Mountains, the Central Coast and Illawarra-Shoalhaven will be ordered into 14-day quarantine on arrival in Queensland from 1am on Monday.

The Sky Blues and Wanderers also have W-League teams.

.@abcsport has a new Australian football podcast coming your way ahead of the 2020/21 #ALeague season 👏

Victory’s W-League team was meant to play the Wanderers on the opening day, while Melbourne City’s A-League and W-League teams were both scheduled to face Sydney FC on December 30.

The Wollongong-based Wellington Phoenix had been scheduled to travel to Brisbane to face Roar on December 29.

“We have 218 games to play in the next (six) months and our plan is to deliver all of those games,” head of leagues Greg O’Rourke said in a statement.

“Where games are impacted by border closures, we will postpone those matches to be played at the earliest opportunity.

“We are closely tracking and reviewing government guidance, and building our plans to ensure that we have the flexibility to respond dynamically to any guidance changes.”

It also appears likely crowd capacities will be reduced for any games in NSW – including the A-League season opener between Western Sydney and Macarthur FC.

There's just 14 days until we kick off our season at @AAMIPark against Brisbane Roar!

Have you got your membership sorted yet? #MVFC #Since05

The majority of the club’s A-League players and staff are due to complete their 14-day hotel quarantine in Sydney on Tuesday following their Asian Champions League campaign.

If they are unable to obtain a travel exemption, Victory’s situation could potentially see players and staff experience back-to-back quarantines.