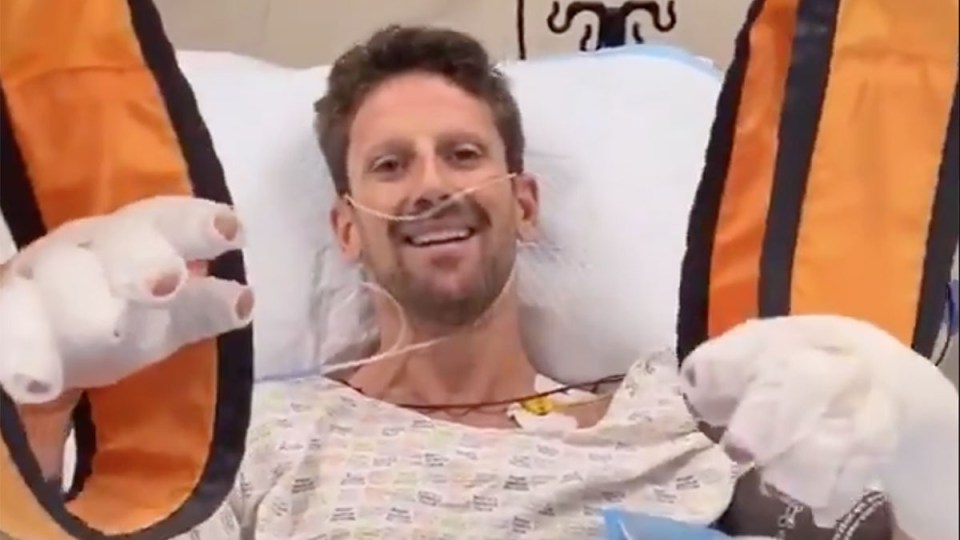 With both hands wrapped in bandages, a smiling Romain Grosjean has spoken from his hospital bed after a horrific crash on the opening lap of the Bahrain Grand Prix, praising the introduction of a safety feature that saved his life.

The French-Swiss national, 34, posted the video on Sunday night, expressing his gratitude for the introduction of the halo head protection device and thanking medical staff.

“Hello everyone. Just wanted to say I am OK, well, sort of OK,” he said, as he waggled his hands delicately wrapped in gauze and mounted in suspended straps. “Thank you very much for all the messages.”

“I wasn’t for the halo some years ago but I think it’s the greatest thing that we’ve brought into Formula One.

“Without it I wouldn’t be able to speak to you today.

“Thanks to all the medical staff at the scene and the hospital.

“Hopefully I can write to you soon some messages and tell you how it’s going.”

Grosjean dramatically jumped to safety in what is being described as a ‘miracle’ escape after his car was ripped in half and engulfed in flames in the first-lap accident that halted the race.

Racing under the French flag for the Haas F1 Team, Grosjean was able to free himself from the wreckage and jump clear of the fire after the car crashed through the barriers.

He was taken to a nearby military hospital for checks. Grosjean’s team said he would remain in hospital overnight for treatment to burns on the back of both hands. X-rays had shown no fractures, they added.

“It is a miracle he is alive,” said Britain’s 1996 world champion Damon Hill, expressing his “absolute shock and horror” at the images on Sky television.

Haas said the last recorded speed of the car was 221km/h, while a spokesman for the sport’s governing FIA said the impact measured more than 50G.

Replays showed the Frenchman, whose Formula 1 career already looked to be coming to an end with Haas having announced the departure of both their drivers at the end of 2020, jumping out of the flames as marshals set off extinguishers.

Australian Daniel Ricciardo said he was disgusted and disappointed F1 kept replaying the crash as other drivers anxiously waited to restart the race.

“I want to express my disgust and disappointment with Formula 1,” Ricciardo said.

“The way the incident of Grosjean was broadcast over and over – the replays over and over – it was completely disrespectful and inconsiderate for his family [and] for all of our families watching.

“We’re going to go race again in an hour and every time we look at the TV it’s a ball of fire, and his car is cut in half. We can see that tomorrow, we don’t need to see it today.

“For me, it was entertainment, and they’re playing with all of our emotions. I thought it was pretty disgusting.

“Hopefully some other drivers have spoken up – if that’s not how we all really feel I’d be very surprised.”

Meanwhile, Lewis Hamilton, who has already won a record-equalling seventh title and was leading from pole position when the red flags came out, said he was just “grateful” Romain walked away with minor injuries and that the motor racing governing body had take “massive strides” in safety.

“I’m so grateful Romain is safe. Wow… the risk we take is no joke, for those of you out there that forget that we put our life on the line for this sport and for what we love to do,” said Hamilton on Twitter, shaking his head in disbelief as he watched the replays.

“Thankful to the FIA for the massive strides we’ve taken for Romain to walk away from that safely.”

The death last year of Formula 2 racer Anthoine Hubert at the Belgian Grand Prix was the first fatality at an F1 race weekend since Brazilian Ayrton Senna and Austrian Roland Ratzenberger died at the 1994 San Marino Grand Prix.

Jules Bianchi suffered serious head injuries in a crash at the Japanese Grand Prix in October 2014. He died in July the following year.

“When you see what is going on out there, if you see the barrier that is torn down, it’s unbelievable,” said Steiner.

“I think we were lucky by being unlucky … we got away with it, I think.”