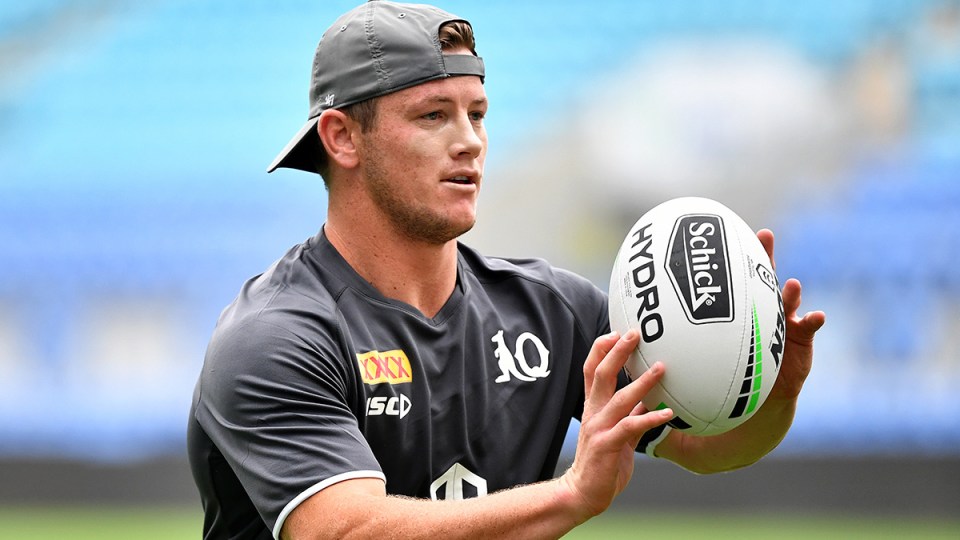 Harry Grant gets a handle on Queensland’s training session at CBus Stadium on the Gold Coast in October. Photo: AAP

The Maroons debutant was just 12 years old when he was hospitalised with a staph infection, doctors telling his parents to prepare for the worst.

Grant eventually recovered but only after three operations and five months of antibiotics.

He then crushed a leg in a quad-bike accident at his local surf club, sidelining him for another 12 months.

Those experiences are behind the resilience that has turned Grant from a promising talent loaned to Wests Tigers from Melbourne for the 2020 NRL season, to the Dally M rookie of the year and an Origin jersey.

It also gave the central Queensland product a life balance that he still draws on today to put his rugby league career in perspective.

“I missed a few years of footy. I was probably oblivious at the time,” Grant said.

“I probably didn’t really understand the severity of it.

“In saying that I had passions away from footy, which was surfing and surf lifesaving.

“Those kind of things helped me. Having the passion away from footy, which I still do now, which helps me to get away from it.”

More than 20 friends and family are expected to make the trip from Grant’s home town of Yeppoon to watch his debut at Suncorp Stadium on Wednesday night, including his father Paul.

The trip south will come at a cost for Grant’s father, a life-long New South Wales supporter who has promised to change his allegiance for the son he feared he’d lost a decade ago.

“He said if I get a run this series, he was gonna turn so I hope to see him in Maroon,” the 22-year-old said.