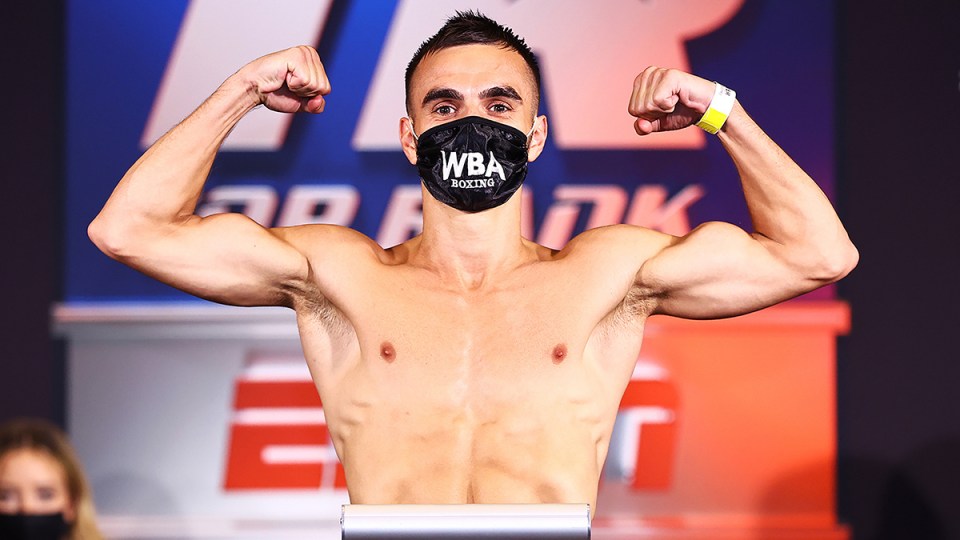 Moloney was certain he had reclaimed the title from Joshua Franco when the American was unable to take to the ring for the third round of their Las Vegas bout.

“When the doctor stopped the fight, I jumped up on the ropes and celebrated because I thought I had won,” Moloney told AAP.

“I’m just so devastated because it’s something I have worked so hard for.

“I’ve been robbed of a very special moment in my career, to stand in that ring and celebrate.”

The boxing world is reeling after today's controversial result between @AndrewMoloney and Joshua Franco.#ozboxing #boxing

Franco’s eye swelled up from what was ruled an accidental headbutt in the first round of the scheduled 12-round contest.

After the ringside physician ruled Franco couldn’t go on at the end of second round because his eye was shut, the fight was called a no contest.

“I was confident they were going to overturn the decision because everyone could see I landed a jab that closed his eye,” Moloney said.

As the waiting went on, the ESPN broadcast team was adamant on air they could see no headbutt and that Moloney should have been declared the winner because the eye damage was caused by punches.

The 29-year-old from Melbourne couldn’t hide his anger and frustration when the decision became official.

“I can’t believe that they took this away from me. I’ve trained my arse off the last five months,” Moloney told ESPN.

Promoter Bob Arum was livid about the decision, protesting to no avail to Bob Bennett, head of the Nevada commission.

“This is an absolute disgrace,” Arum said.

“There was no headbutt. Andrew Moloney should be the new champion.”

Moloney told AAP that Arum wants to have the decision investigated by boxing authorities.

“I believe he is going to protest the decision and try to get it overturned, which I believe is the right thing to do,” Moloney said.

“But even if that happens it’s still devastating because I’ve been robbed of that moment in the ring that means so much to me.

“It’s been a tough few months being away from my family, but it would have made it all worthwhile to get my world title back.”

The bout was a rematch of their first fight when Franco knocked Moloney down in the 11th round and scored a unanimous decision over the formerly unbeaten Australian.

There is already talk of another return bout.