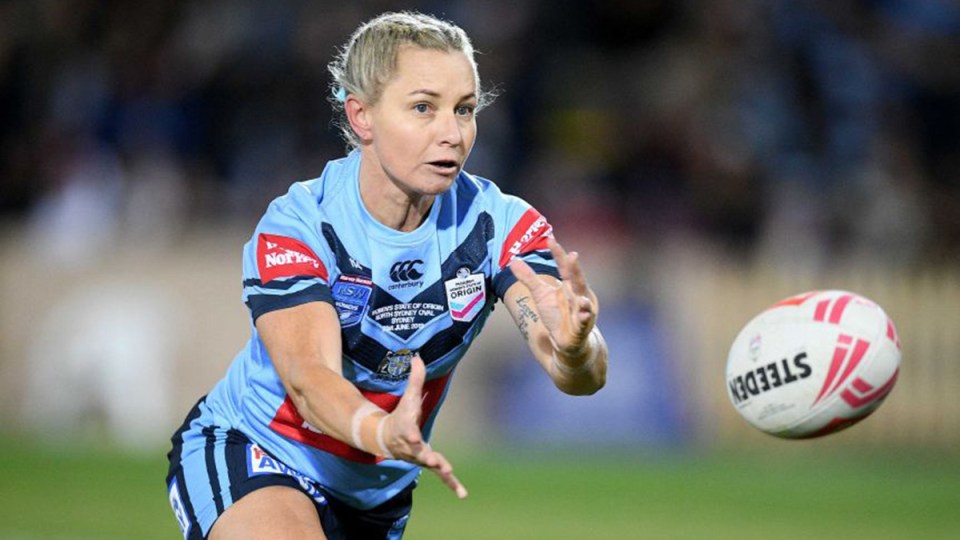 Kylie Hilder will run onto the Origin field as the oldest woman to play for the Blues. Photo: AAP

State of Origin didn’t exist when Kylie Hilder was born in 1976.

At 44 years old, the mother of two from Forster is the oldest woman in rugby league history to run onto the field in the Blues jersey.

She likens herself to a good red wine that gets better with age.

“I got through this season and am feeling really good.”

So what’s her secret?

“You just have to keep training and looking after your body, doing the right things, and the body keeps turning up.”

She’s played in the hooker role seven years longer than Melbourne Storm stalwart Cameron Smith, and looks at his career as motivation.

“I love Cameron Smith and the game of rugby league – what he’s done and at his age (37), the fact that he turns up week in and week out, you know you’re going to get the same consistent Smith.

“So he has been an inspiration, but as a hooker, Jake Friend from the Roosters is my favourite,” she says.

‘Age is just a number’

While representing her state at the highest level at 44 is an incredible feat, Hilder wants people to stop viewing age as a barrier.

“Have a crack. Don’t think about age. I always say age is just a number on your birth certificate,” Hilder says.

“It shouldn’t matter how old you are. If you’re up for it, get out there and give it a crack. Life is pretty short, so just enjoy it.”

In saying that, Hilder does admit she picks up more injuries than her younger teammates.

“But I make sure I do all the right things behind the scenes to keep the body good,” she says.

Hilder believes her active lifestyle contributes to her on-field success.

Away from footy, she’s a mum to two teenage boys.

“We live in Forster so the family goes wakeboarding and on the boat, we’re really active and physical,” she says.

“I have two sons, they’re 16 and 12, so they’re just starting to get into their rugby league careers as well.

“My 16-year-old is in his second year of representative footy now.”

And he’s learning from the best.

“Getting into the serious representative football, we go to the gym and do sessions together. I try to pass on my knowledge to him as well, and he actually listens to me, so it’s even better.”

Hilder has checked off so much in her decorated career.

She led the Blues to victory in 2019, represented Australia with the Jillaroos, and has won multiple premiership trophies and four Touch World Cups.

But after this year’s Origin, Hilder has decided she’ll hang up the boots.

“This is it – I was assistant coach and was brought into the squad, but it’s great to be back in training with the girls, I am really enjoying it.”

She’s confident the Blues can take out their third straight title.

“The team is feeling really confident going into the game. These nine debutants, you wouldn’t think they were new, we’ve really bonded as a team which is a massive thing. If you’ve bonded off the field it really carries onto the field.”

Hilder has been involved in the game for a long time. Currently she’s a women’s participation officer for league, and has been an assistant coach to the NSW women’s side and the NRL Nines. She’s also dabbled in some commentary.

She’s been blown away by the growth of the women’s game in recent years, and believes this is just the start.

“Absolutely, the women’s competition should expand.

“Obviously this year was a bit hard because of COVID, but the talent that’s coming through is unbelievable, we need to look at expanding in length and introducing more teams.”

Hilder has been a pillar of strength in camp for Isabelle Kelly and Kezie Apps, who were both under an injury cloud but have now been cleared to play.

“Kylie brings experience and so much knowledge around the game to this group, she’s my best friend,” Kelly says.

Kezie Apps says the Blues are lucky to have Kylie in their ranks.

“Her knowledge and the way she reads the game – to help other young hookers coming in has been a huge bonus for us passing on that knowledge to Quincy (Dodd) and Keely (Davis), just her calmness on the field and bringing the forwards onto the ball.”

Hilder is humble in her role as the self-proclaimed ‘mother figure’ in camp, and is happy she can pass on her knowledge and experience to the group.

“Its so good being back around the girls. It’s such a drawn-out campaign this year, but we’ve got nine debutants here, so just being around to help them is great.”

Queensland is hosting the match for the first time in women’s Origin history.

44-year-old Kylie Hilder is still playing State of Origin, because ‘age is just a number’