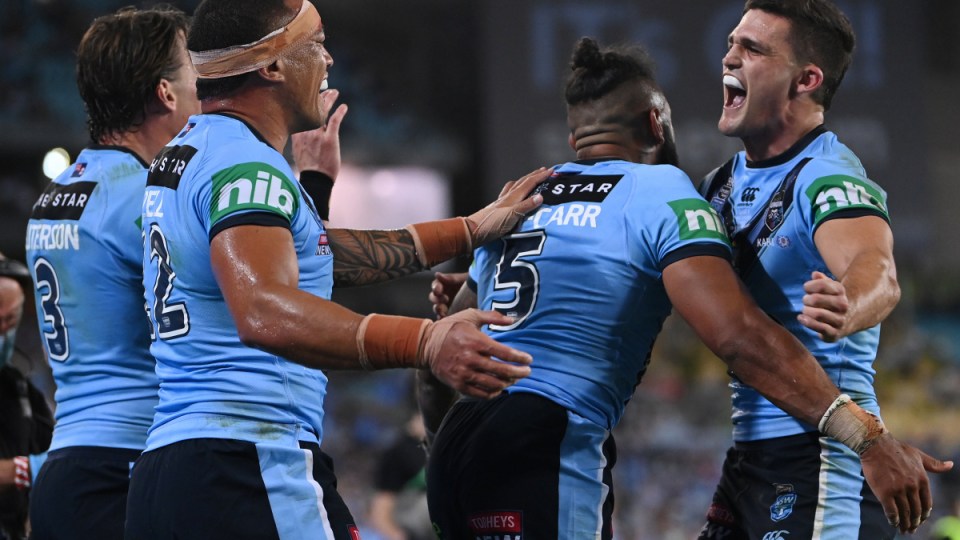 New South Wales used its home-ground advantage to pummel Queensland 34-10 in Sydney on Wednesday night and level the State of Origin series.

The Maroons overcame the second-minute loss of playmaker Cameron Munster to post the first points, but that joy was short lived as the Blues bounced back in style.

It was all one-way traffic after Xavier Coates’ spectacular try in the corner, as the Blues lived up to their pre-series tag as overwhelming favourites, controlling possession and field position against their humbled opponents.

Holding a deserved 18-4 advantage at half-time, the Blues – led by halves Nathan Cleary and Cody Walker – continued their momentum to consign last week’s loss in Adelaide to a distant memory.

They also kept alive their hopes of the state’s third three-peat.

One of the GREATEST finishes of ALL-TIME! Nothing short of unbelievable from Xavier Coates.🔥😎#Origin LIVE and exclusive on @Channel9. #9WWOS pic.twitter.com/HpZHjBoZVu

Entering the game as the first NSW half in history to go through his first six games without a try assist or linebreak assist, Cleary played a crucial role in the Blues’ three first-half tries as they levelled the series at ANZ Stadium.

His brilliance highlighted a fiery game that included Payne Haas and Tino Fa’asuamaleaui being sin-binned in the second half for throwing punches.

By the end of Game II Cleary had broken the line once himself and put two players through holes for tries to go with a late 40-20 kick.

The Blues bite back!🔥

Cody Walker is back in the starting line up and back in the Origin try-scoring column.🏉#Origin LIVE and exclusive on @Channel9. #9WWOS pic.twitter.com/Yxd04dpcMc

“He’s been under a bit of pressure this week Nathan Cleary, but he’s standing up and coming up with some really big plays,” Johns said during the Nine Network commentary.

“He’s been super. A couple of big plays with early kicks that changed the momentum. He’s demanded the ball.”

After the Maroons crossed first through Coates, Cleary put the Blues on the front foot when the 22-year-old dummied and stepped his way through the line.

Two plays later Cody Walker spun and fended his way over on the right, as the five-eighth also starred in his own redemption tale.

Cleary’s boot was influential for the Blues’ next two tries, as he regularly kicked early to corners.

Josh Addo-Carr’s sprinting chase on his first kick gave the Blues field position, before the halfback found a stepping James Tedesco to score.

And when Coates dropped a Cleary kick just before the break, the Blues stripped Queensland for numbers from the scrum and Addo-Carr crossed.

Cleary wasn’t alone for the Blues.

The Blues are starting to do some serious damage on the scoreboard.#Origin LIVE and exclusive on @Channel9. #9WWOS pic.twitter.com/Y7n6rLBjHx

Tedesco was also superb in his first game as captain, throwing the last pass for a Daniel Tupou try from a scrum.

Again, the field position came from Cleary pressure on a Jake Friend kick that went out on the full.

And Walker continued his end-of-season form, grubber-kicking for Addo-Carr’s second try as he provided real spark on both sides of the ruck.

Less than three minutes into the second stanza…

Walker bagged a try, had a hand or boot in three others and generally terrorised the Maroons precisely the way coach Brad Fittler had hoped he would.

Whether it was his short ball for Angus Crichton or a long ball for Daniel Tupou, Walker was particularly menacing on the left edge.

Walker said he was far more comfortable in his Origin comeback start than on debut last year.

“I didn’t have too much nerves last night and today,” he said.

“So I just wanted to come out and play some footy, mate, and enjoy myself.”

Meanwhile, the Maroons desperately missed Munster, who was replaced by Ben Hunt at five-eighth.

They started the game well when Daly Cherry-Evans helped an acrobatic Coates cross with a cutout pass.

But they lacked spark and struggled for field possession after the first 15 minutes, with Josh Papalii scoring their only other try – again from a Cherry-Evans pass.

Papalii vs Cook… there was only ever one winner!💪🏉#Origin LIVE and exclusive on @Channel9. #9WWOS pic.twitter.com/HBCu7TKMDm

The left-edge combination of Hunt and Felise Kaufusi missed a total of nine tackles as Walker and Tedesco caught their indecision in the line.

Those missed tackles were among 32 for the Maroons.

“They’ve been able to pick the Queensland defence apart and they’re having a lot of trouble on their left side defence now that Hunt is playing five-eighth instead of Munster,” former Blues coach Phil Gould told Channel Nine.

“Looks like no communication or confidence there, but the Blues are moving the ball nicely down this side of the field.”

Queensland have given Addo-Carr an absolute GIFT for his second pie.🥧#Origin LIVE and exclusive on @Channel9. #9WWOS pic.twitter.com/BNnJH3e4O6

Munster remains in doubt for next Wednesday’s deciding match at Brisbane’s Suncorp Stadium.

The 26-year-old Munster was wobbly on his feet as he attempted to stand up and was escorted off the field by Maroons medical staff, where he failed the head injury assessment.

He will need to pass thorough stringent concussion protocols to play in the decider.

Rookie of the year Harry Grant could come into the side if Munster fails.