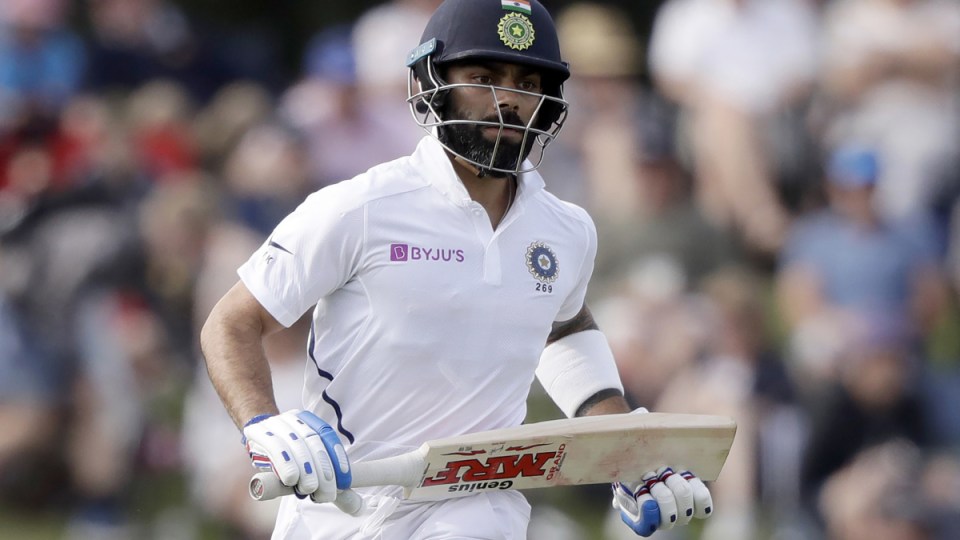 India's Virat Kohli will return home for the birth of his first child. Photo: AP

India skipper Virat Kohli will face Australia in only one Test this summer after he was granted paternity leave to return home after the series opener in Adelaide.

The Indian cricket board (BCCI) announced on Monday that Kohli will leave his team’s tour of Australia after the first Test to attend the birth of his first child.

Kohli and India’s huge touring party will soon travel from Dubai to Sydney on a charter flight, sharing it with Australia’s Indian Premier League stars.

The superstar batsman will play in the six limited-overs matches in Australia before he will return home to be with his wife Anushka Sharma for the birth in early January.

🚨 JUST IN: Virat Kohli will be granted paternal leave after the #AUSvIND Test in Adelaide. He will return to India after the first game. pic.twitter.com/EFQfajppbE

The four-Test series will commence on December 17 at the Adelaide Oval before the Boxing Day Test showdown at the MCG and matches at the SCG and the Gabba in the new year.

Royal Challengers Bangalore captain Kohli recently added his voice to a chorus of concern about the sustainability of bubble life, suggesting the length of tours in the COVID-19 era should be considered.

“It does get difficult at times because it is repetitive,” Kohli said.

“Mentally, it can be taxing if this continues for this long a period at a consistent rate.

“It has to be broken down, it has to be based on how the individuals are feeling and I think that conversation should take place regularly.

“You want the players to be in the best state, mentally and physically.”

🔹 Rohit Sharma has been rested from the T20Is and ODIs due to fitness concerns. He is a part of the Test squad.

🔹 Sanju Samson has been added to the ODI squad.

🔹 Injured Varun Chakravarthy has been replaced by Thangarasu Natarajan in the T20I squad. pic.twitter.com/L9oriZ1ouZ

Meanwhile, the BCCI detailed changes to the three squads across formats with the major news surrounding the inclusion of gun batsman Rohit Sharma to the Test squad.

Sharma and veteran Test wicketkeeper Wriddhiman Saha have both been hampered by hamstring injuries.

The 33-year-old Sharma has captained Mumbai Indians to the IPL final and there had been mixed messages regarding whether he will make the trip Down Under.

“It has been decided to rest him for the ODIs and T20Is in Australia to regain full fitness and he has been included in India’s Test squad for the Border-Gavaskar Trophy,” a BCCI statement said.

Sunrisers Hyderabad gloveman Saha missed the IPL finals and is in doubt, with a call on his availability yet to be made.

Senior quick Ishant Sharma has been undergoing rehab for an abdominal muscle tear and “once he fully recovers and gains sufficient match fitness, he will be added to India’s Test squad,” the BCCI said.