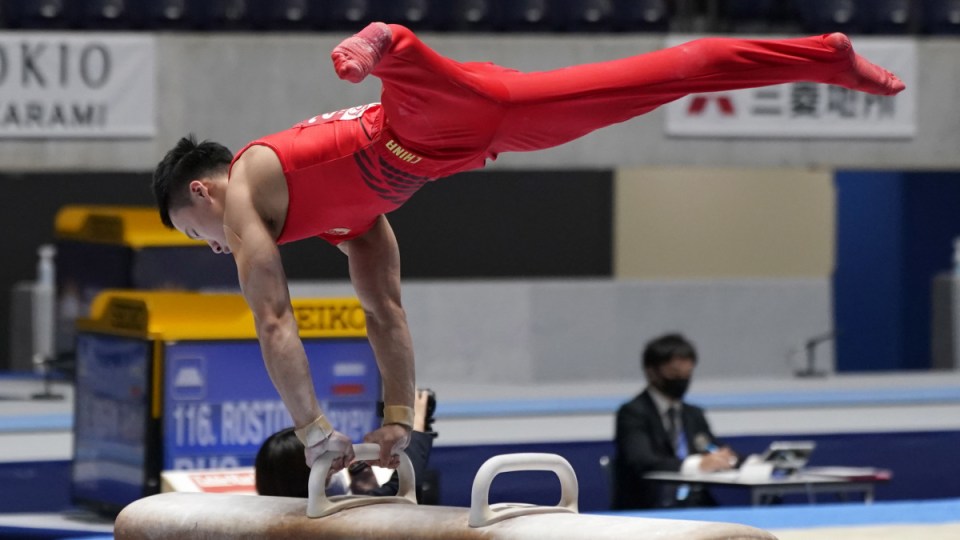 China’s Yin Dehang competes on the pommel horse at the Gymnastics Friendship and Solidarity Competition in Tokyo. Photo: EPA

The good news for the Tokyo Olympics is that Japan has held a one-day exhibition gymnastics event in front of several thousand fans with 22 athletes participating from Russia, China, and the United States.

They were joined for Sunday’s exhibition event by eight athletes from Japan.

The non-Japanese entered the country after a 14-day quarantine at home and were largely kept penned up in their Tokyo hotel in strict isolation.

The event is the latest – a Japanese baseball stadium was filled to capacity last week – intended to show that the postponed Tokyo Olympics can open safely in just under nine months.

But there are more difficult numbers that the Olympics must overcome.

Return of international sport to Japan a "huge success" says triple Olympic champ Uchimura Kohei, who put in a stunning performance to thrill the Tokyo crowd at the @gymnastics Friendship & Solidarity meet. 🤸

Next year’s Games will involve 11,000 athletes from 206 nations and territories, all affected differently by COVID-19.

Add to this 4400 Paralympians and thousands more officials, judges, VIPs, media and sponsors who will also need to enter Japan, not to mention tens of thousands of non-Japanese fans who may want to attend.

Tokyo organisers and the International Olympic Committee have given few details of how they intend to deal with the pandemic and its aftermath, with concrete plans not expected until next year when a vaccine and rapid testing may be available.

“Unfortunately, 80 per cent of the Japanese don’t believe that the Tokyo Olympics can take place as a result of the COVID-19 pandemic,” he said, speaking after the meet in Japanese on a public-address system to fans in the Yoyogi National Stadium.

“I know it is natural to think this way,” he said.

“But I would like people to change their minds from, ‘We can’t hold the Olympics’ to ‘How can we do it?’.”

Japan has controlled the virus better than most, although Prime Minister Yoshihide Suga warned last week of a resurgence in the country.